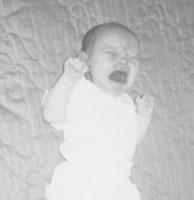 
Can you not HEAR the toddler screaming your name? Because you seem to be able to hear your girlfriend sitting across the table.

Can you not HEAR the 2 year-old asking “Mommywhatsthat?” every three seconds? Because the IM beep on your laptop appears to be working.

Can you not HEAR the child screaming as it runs up and down the aisle of the train? Because your cell phone seems to be getting pretty good reception.
When your water broke, did your eardrums go with it?

What is it with mothers and the ability to just completely tune out a yelling child? How is this possible? I never see this with fathers. I never see a man completely ignoring a child who is yelling its purple head off. It seems to only be mothers. Are they just as sick of the kid as I am?

I am, clearly, not a parent. I’ve never had a child of my own to love, hold and, apparently, ignore. And I have never been around someone so much who is so dependent on me that there are times I can’t even listen to him.

A few years ago, some people I graduated high school with called me up and we all went to lunch together. There were 5 of us. We all came alone, except one of us brought her child. It became impossible to carry on a conversation as this child’s constant needs seemed to be heard only by us and not his mother, who would just continue talking over the demands/tantrums/screams of her child. When she called me the next day to say how much fun she had and wanted to do it again, I said, “I’d love to, but next time you have to leave your child at home so that we get a chance to talk.” According to the grapevine, Terry was mortified, and I never heard from her again. Just being honest here.

When I go to a restaurant, I sometimes ask for the table next to the screaming infant because that is, invariably, where the host/ess will seat me anyway (so we may as well work as a team here).

Can these mothers also not hear fire engines and police sirens when they choose? Can jack-hammering go unnoticed? If these same mothers were sea captains, would they crash their boats into the rocks because the fog horn may as well have been a whisper?