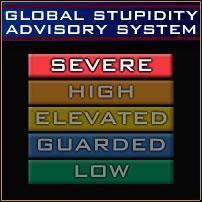 Whatever happened to the Terror Alert Code? Remember that color-coded system the Department of Defense and Homeland Security used to alert (scare) citizens to possible terrorist activity (bogus intelligence)? It was all we heard about for two years or so and then miraculously, after the November re-election of “W”, it’s no longer in the news every day – or every other day – or even once a week anymore.

I can only assume that since there has been no word about raising the “alert”, the nation is currently under code “Bert” (Yellow), our standard terror level. We seem to stay here because it conveys the necessary fright, without overdoing it. But I betcha it jumps in a second to code “Ernie” (Orange) when “W’s” approval rating or support for the Iraq war both fall below 50%.

Of course I realize that al Qaeda is still out there and certainly poses a severe threat to our nation and to Americans around the world. However, I am expecting that before the next presidential election, the old code system will rear its head once again to remind (coerce) voters who established the code in the first place.

With luck, it will never progress to code “Elmo” (Red), the highest and most dangerous code. And I doubt we will ever see code “Grover” (Blue) or code “Oscar” (Green). I think “Oscar” exists just to tease us – knowing that we can never get there because if we did, what good would this entire code system be?

After all, fear is a weapon and our government is armed and dangerous.