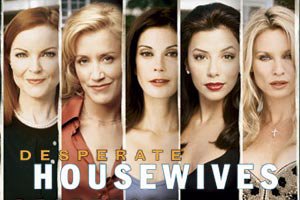 I don’t get the attraction to “Desperate Housewives”. Maybe I am just not gay enough (ye gods, I can't believe I actually admitted that).

I’ve seen DH a few times and it’s ... well it's okay. The writing is sort of common and the plots are a bit far-fetched. As a series, it moves too slowly. I missed 5 episodes and felt completely caught up without watching any of the shows in between (kinda like not reading "Apartment 3G" for three years).

Does just crave women-ensemble cast shows? Is there a real need to have that on television so women and gay men can have something to discuss on Monday at the watercooler while the Mesolithics are discussing football?

Don't get me wrong here, I heart the chick shows. Quite honestly, there is a huge absence in my everyday life of pretty, hip, fun women. I watch televison and I openly wish that I could have lunch at Cafeteria in NYC with Carrie, or go to the Rusty Anchor in Miami with Blanche.

But I think the one thing that Desperate Housewives does is gives a label to all of the shows that have preceded it. Women, especially in groups, are depicted as being desperate ... for something. Be it love, acceptance, or even just acknowledgment, women are almost always portrayed as longing, needing searchers.

First, there was Lucy and Viv, the original desperate housewives. Then came Laverne & Shirley, working-class girls who still had that wanderlust and desire for a better life. Then Cagney & Lacey - two tough NYC cops, one of which being an alcoholic in desperate search for love. But these were just women-duo shows. Not really the genre the "women group" has created.

The pioneer in that group is the original Charlie’s Angels (wildly popular until Kate Jackson was replaced by Shelley Hack which was just sacreligious). The Facts of Life - admittedly hokey - was popular for several years and introduced the world to the first lesbian teenager (hey Jo!). And of course, The Golden Girls (my very most favorite), which will run forever in syndication and remains one of the funniest shows on television (DH Executive Producer Marc Cherry is a GG alum). Then Living Single that showed us Queen Latifah can act, and what Tootie was now doing as an adult. And the biggest of them all: Sex And The City. All of these shows were successful. But all showed women in need, unhappy with life, desperate.

Now, along with DH, there is also Related, brought to us by the creators of the "Sex" girls. And there is also Girlfriends and The Division (hey Jo!), both on cable.

I don’t know if DH is supposed to be believable or not. I am not sure if it is supposed to be Place-ish or Stepford Wives-esque. If DH is aired because it fills a “type”, then I guess it’s a fun necessity. But I would hardly acknowledge it as clever, smart or even, as I have pointed out here, ground-breaking. A more refreshing show would be called something like "Women Fulfilled" and"Who Needs A Man?"