I was pretty certain that I would not go dressed up as anything this Hallowe’en. Dressing up usually isn’t my thing. I like it, I like to see it, it’s fun and I even enjoy a good drag show now and then (there were even times when I dipped my toe in a pump or two, but that’s another story). But Kevin told me that he was having none of that and I would be dressing up this year – like it or not. He had an epiphany of what my costume should be and he said he could create it and make it happen. So I put my faith in him and in two weeks, he created my costume from scratch. When he initially said I would be an Oompa Loompa from Willy Wonka and the Chocolate Factory, I completely doubted his ability. How wrong I was - see for yourself: 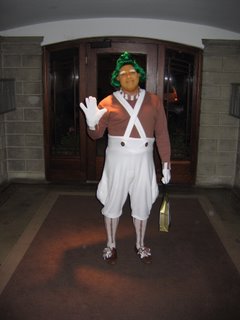 With the exception of the shoes and the wig, everything was made by Kevin: the overalls are made of fleece (as are the gloves), he dyed a white long sleeved tee shirt to be the correct colour brown, he made the collar, the cuffs, socks and the tassles for the shoes, and he styled the wig out of a green bob we found at Beatnik’s. Some orange makeup and VOILA! – instantly recognizable Oompa Loompa!

Kevin’s costume was a bit more cultish – he went as Powder from the eponymous movie. He shaved his head, face and upper body, covered himself in clown white and found the ideal clothes. Kevin was eerie (but his sexy abs got a lot of attention).

Saturday night we went to a house party and were joined by Jessica, who was wearing another Kevin Original. Completely unrelated to my costume, Jess went at Veruca Salt, wearing the red dress with white collar from the original movie, but having attacking squirrels attached to the dress a la the book. We all went party/bar hopping and wound up at Sidetrack to begin garnering support for Monday’s competition. Whereas I was instantly identifiable, Kevin’s costume was not. Either you know about Powder or you don’t. And it seemed almost like an insider thing – people were almost proud of themselves for “getting” his costume. And there were a lot of them.

Sunday night, Jessica joined us to go to the Haunted Sanitarium at the Theater On The Lake. It was done well. Lots of things popped out of walls and lunged at us. Jess definitely got her scream on. She was dragged through by Kevin and clutched me with her other hand. Shielded by us was no consolation for her. Truly, Jess was far more entertaining than the sanitarium. Kevin and I came home after and rented Hide and Seek. DeNiro is always a ½ beat away from scaring the pants off of me anyway. But Dakota Fanning must secretly be about 68 years old because she has had to be studying acting for like 40 years or something. The kid is, quite simply, good.

Monday night, we put out costumes back on and returned to Sidetrack for the night of drunken debauchery and costume judging. There were some pretty amazing outfits:

Barker's Beauties and the Wheel

Scary (and I do mean SCARY) Clown

The Corpse Bride (my personal favorite of the night!)

And out of more than 30 entrants, I won second place and $250.00! Sometime before the contest, Kevin and I must have spoken to one of the judges because when I was called back up on stage, they pulled him up too because he had made my costume. I was beaten out of first by a self portrait of Frida Kahlo, complete with foliage, a monkey on her shoulder, and her own spotlight.

This was one of the best Hallowe’ens I have had in my adult years. I was thinking at the onset that I was getting a little too old for this kind of thing. But I guess when you dress like an ageless dwarf, it doesn’t really matter.

By the way, I am just LOVING the move to !