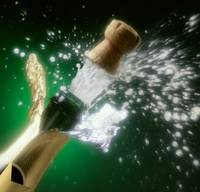 This year of 2005 could go down in history as being my "annus horribilis” (and no, that does NOT mean horrible anus, although I have met one or two of those in my day - but that's another story). The term was used by Queen Elizabeth II to describe 1992 - the year that the marriages of her two sons, Charles and Andrew, broke down and Windsor Castle caught fire (please Lizzie, two divorces and a couple of lost paintings can hardly compare to my turmoil! Leave it to a Queen to get dramatic.)

I think I had alot to stress about throughout this past year: an ended relationship, my nipple ring being yanked out, the heart attack, the heart surgery, the 6-week recovery, my muscles degenerating, the relocation to Chicago, the remodeling in my new apartment and not having a kitchen for two months, leaving my family and all my friends, the new job hunt, and being unemployed for 4 months.

Yeah, my relationship with Ex#5 ended back in the Spring (but I met someone else (The BF) a few months later who entertains me, challenges me, adores me, makes me feel sexy, and makes me smile almost constantly).

So, the nipple ring got yanked out (but it healed, and quite nicely too).

Yeah, there was a heart attack and surgery (but I never would have gotten to spend that wonderful time with my family while I was recovering had it not been for that. That is time I never would have been able to have any other way).

My muscles went soft and I lost some of the hard work I had been doing the last 4 years (but I am able to go to the gym again and it will all come back, probably quickly).

Living in an apartment without a kitchen and partial bathroom for two months sucked (but I did it before back in DC and it turned out fine. This did too).

Leaving my friends and family was hard (but the true friends are staying in touch with me and always will, and I am making new ones here).

Leaving my old job in DC was sad for me (but I found one in Chicago that I like alot and presents new challenges).

One of my saving graces in all of this was my ever-fabulous roommate, Ashley. Without him, I would have suffered even more. With each passing day I kept asking the powers-that-be why I was going through test after test? Where was the logic? Where were the answers? Ash made it bearable. He was with me through it all: listening to me bellyache, supporting my relocation to Chicago, visiting me in the hospital, packing all my shit and moving it across country, and then supporting me (both emotionally and financially) while unemployed.

I went through several extreme tests this year - the kind that help you realize who your friends are, the people you can count on, who has your back, who is there for you. If this was to be the lesson, then consider it learned. Thinking back on my annus horribilis, I had it tough - but it could have been alot tougher.