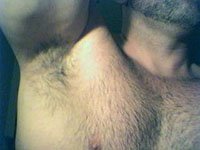 One thing I take very seriously is my personal hygiene. Don't get me wrong - I don't mind sweating. But I don't want to smell like I've been digging a ditch for 5 days. On others, however, I don't mind a l-i-i-i-ttle sweat smell (I actually think "morning musk" is a hot scent when emanating from the man you love).

I say all this because I was reminded of a scenario that took place several years ago. I had recently moved to DC and had been going to the DC Eagle - not because I was into leather or anything, but because that was the place where men talked to me. I wasn't attracted to 98% of the men in that bar, however looking like I did, I was attractive to a large number of them.

A mulatto, an albino
A mosquito, my libido. Yea.

Perhaps I went to feed my ego a little, but mostly I went because I could socialize. At the Eagle, the men only talk to you if they like you. Otherwise, they don't bother with you. There's no gossip, there's no talking behind your back. And if someone IS talking about you - it's in a positive way. Perhaps not the way you would like to know about, but a compliment is by all means still a compliment.

And I forget just what it takes.
And yet I guess it makes me smile.

On one particular Saturday night, I had decided to go to the Eagle, so I cleaned up and headed out. After standing for a while inside the very dark bar, I finally became aware of a man standing to my right, rather close. I could hear him sniffing the air, the way a lioness smells for a possible fresh kill.

With the lights out, it's less dangerous.
Here we are now, entertain us.

Suddenly, he turns to face me and spews out, "sniff, sniff. Is that YOU??" Me, being confident in my clean hygiene, smugly replied, "That's not me, man. I showered!" To which he replied, "That's what I mean, are you wearing ... deodorant?" That last word crawled out of his mouth in slow motion, each syllable hitting a higher note than the one before. "Umm ... yeah" I said, sounding more like a Valley Girl than a butch man, and with that he made a face like I had just farted in his Wheaties and walked away.

I feel stupid and contagious.
Here we are now, entertain us.

I guess that is why I have always looked the part (in leather), but never really fit in. Leather men and boys are supposed to be smelly. The whole connotation for the leather scene is dirt, grunge, filth and grease. And that ain't this kid. I mean it's fun to dip my toe in once in a while, but I wouldn't want to swim in it. Unless, someone has a bar of soap I can take in with me.

I found it hard, it's hard to find.
Oh well, whatever, never mind.