Nothing New Under The Zun

But American Dreamz is way more hip than American Dreams. After all, there is a "z" instead of an "s". But DreamZ, aside from having a bit of flava in the title, boasts the whitest cast ever assembled for a movie; Hugh, Dennis and Mandy all look like they just stepped out of a saltines box. Add to that actors Willem Dafoe and Chris Klein, and the entire cast practically glows in the dark. I haven't seen the movie - I won't see the movie - but it looks as if Hugh is playing a Simon Cowell-Bitchy Brit type, and Dennis is a disengaged, somewhat estranged U.S. President (hmmm, "W"onder "W"ho that could be based on?). 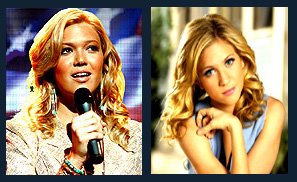 Can you tell which is which? Yeah, me neither.

I think the real American Dream(s)(z) would be for the creative department(s)(z) to be ... well, creative, and to come up with new idea(s)(z). It's one thing to do a variation on a theme, but quite another to do that variation and not even change the title. Simply changing a letter is just downright insulting. What's next?: Happy Dayz? Good Timez? Golden Girlz? Dynazty? Sorro? Tarsan?