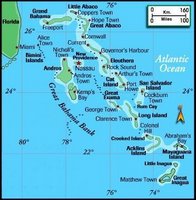 Having never been to The Bahamas, I can admit now that it was exactly what I expected: bright blue sky, green clear ocean, pastel-coloured houses, and everyone sounding stoned. What I didn't know, until I arrived, was that the Bahamas, Nassau, and Paradise Island are all three separate places (I guess I just never had to think about it before). The Commonwealth of The Bahamas is an archipelago of about 700 islands in the Caribbean; Nassau is the capital of The Bahamas located on New Providence Island (for some reason I used to think Nassau was in Florida); Paradise Island is a small island adjacent to New Providence Island. In summation, we went to Paradise Island - so I went on vacation and had a geography lesson. 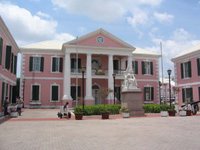 Now where was I? Oh yeah - the colours of Nassau. On our first full day, we took a boat from Paradise Island to Nassau to walk around. The boat was "hosted" by a local man who, as he claimed, was "not employed by the boat company" and relied on tips for his helpful information from friendly folk such as ourselves. His information consisted of pointing out all the huge houses on Paradise Island, all of which seemed to have something to do with "the actor, Nicolas Cage" (hence Monday's Eye Candy). He seems to own a big chunk of Paradise Island. The tour hosts seem to really have to stretch for things to say on the 10-minute boat ride, because they also needed to point out the houses that were owned by the late actor, Richard Harris, and the even later actor, Charlie Chaplin. Not sure why either of those is relevant, but two separate "tour guides" pointed them out both to and from Nassau. 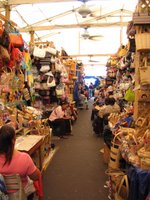 Nassau looks like it has been beaten up a few times, but that is also the beauty in it. It's something like a battered woman, with bright paint on the buildings chipping away to show the worn suffering underneath. Our first stop was the Straw Market (pictured at left). Rows and rows of individual vendors line the inside of what is basically a huge tent. There might be 100 vendors located here, but each one is selling the same thing, so some try to get your attention more than others. Walking through, we heard, "Hey big guy, hey big guy!" Naturally, I thought it was me, so I just ignored it. And then we heard, "Hey big guy, Tom Cruise!" I guess to the locals, that was a nickname for anyone who was fair-skinned, dark-haired, and adorable-faced, like The BF. Four steps later, we heard, "And how about you, Triple X, Vin Diesel!" (That one, I knew, was for me.) 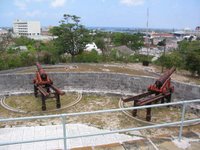 We walked through the narrow streets and climbed up to the highest point of the island so that we could see Fort Fincastle, a fort that was built for a battle that never happened. We meandered through and caught the first cool breeze of the day after hiking up the Monte Carlo-esque streets. The Fort was small, still with cannons that were unfired lining its walls, and very dark recesses that required the flash on the camera in order to see anything. The view from the top was worth the hike, offering a view for miles across New Providence. 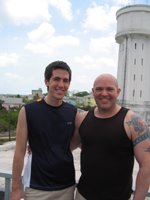 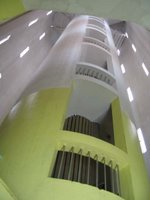 The picture on the far left was taken on top of the fort and behind us you can see the Water Tower, the highest structure on the island. After making our way through yet more vendors (who were admittedly having a rather slow day atop the hill), we went into the tower only to discover that it was closed for repairs, but the view inside, looking up, was just amazing, with light pouring in every window. Still, it would have been fun to climb the steps and take in the view. 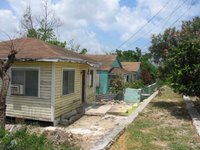 Next we walked down a small roadway on our way to see the Queen's 65 Steps. I was struck by a group of houses that were located near the tower. On an island that does not look like its cramped for space, I thought it odd that there would be this row of houses sitting so close to the fort and the tower. Perhaps they were in habited by caretakers at some point, but they didn't seem occupied now. Or perhaps they were. That's what I meant by the weathered look of the city; you can't tell the old from the new. The houses seemed almost forgotten and lonely. But there was still beauty there, and I am glad I stopped to take a picture of it. 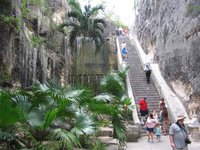 The last site we visited was the location of the Queen's 68 Steps, built by slaves during the reign of Queen Victoria to be a passage way from the west and east sides of the island. Try as we might, we could never seem to get a really great explanation of its history. Sure it was an impressive sight, but The BF believes that it looks as though it began as a passage way dug through the rocks that eventually was just given up on and had steps built instead. And that's a pretty good explanation of what it looks like.

We stopped for lunch in town before heading back, by boat, to Paradise Island, having to hear the "tour" again about the big homes and who owns them. The rest of the day was spent laying on the white sands and swimming in the green ocean. And the evening was spent in the Casino. I won a little, but then just gambled it all away. But it was apparently enough for The BF to decide that our next vacation will be a July trip to Vegas.