The BF and I didn't mind getting up at 5AM in order to get to O'Hare and be on a 7:30AM flight. Leaving Chicago on the 7th straight day of rain was just what we were looking forward to. We completely lucked out on our flights. The first leg was flying from Chicago to Dallas-Ft. Worth, where we sat next to each other in a two-person row. After arriving at DFW, we only had about an hour before our flight to Nassau. After talking with the man at check-in, we managed to score the exit row for just the two of us. Plenty of leg room and space for the three+ hour flight.

We arrived in Nassau just after 3:00PM and had to go through a fairly simple customs process. The airport in Nassau was about the same as the one in Cancun, which I passed through back in 1998. The airports in the Caribbean are stark, lacking the decor and comforts of most American airports. Every room we entered was either very large and empty, or low-ceilinged and dismal. But then again, people are there to tour the islands, not the airports. Still, there was a band in the corner playing a calypso version of "Fools Rush In". The BF dubbed them the "Airport House Band" and we wondered how a group got a gig like that. Was it a real score or considered the bottom of the barrel?? 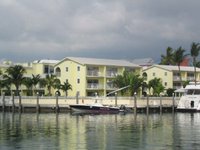 A $30 taxi ride brought us to our condo on Paradise Island, right on the marina. We stayed at Club Land'or, which at first seemed like a strange name until we were told that it translates to "Land of Gold". (Okay, it's still a little strange but at least we got an explanation.) The condo was the perfect place for a beach vacation - not too old as to be outdated, but not too new that you were afraid to get sand on everything. The place offered a great location and easy access to the beach and shopping and restaurants. 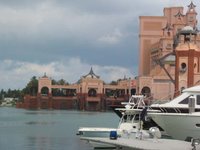 And we were just across the marina from The Atlantis Resort, the ultimate Bahamanian destination. Spend a few minutes on their website and you will see what I mean. The place is magnificient. We were lucky to be so close to it, without having to pay for it. Club Land'or seems to be "Cinderella" to the Atlantis's "Wicked Stepmother and Stepsisters". Atlantis tolerates Club Land'or and might even be a bit jealous that it's not really part of the family, but still allows it to exist in its inobtrusive and oblivious way. We were able to access all almost all of Atlantis' ammenities. Especially the casino!

Almost immediately after checking in, we headed to the beach and caught the last rays of the day. The water was crystal clear. Just standing in the ocean we could see fish swimming around our feet. The waves were gentle, not like crashing surfs I am so accustomed to from the east coast U.S. beaches. 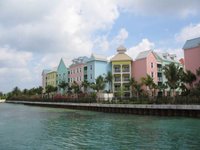 One of the first things we realized was that being on an island, just about everything is imported. Along with that comes the costs of such. It's so easy to get lost in the beauty of the island and forget that you are actually paying 75% more for something here than you do in the states. A regular sized smoothie from Jamba Juice costs me $4.50 in Chicago, but cost $8.00 in The Bahamas. Just about everything was marked up like crazy. Two Miller Lites from the bar in the Casino cost $13.70. We quickly adapted to Kalik Beer, which is brewed only in The Bahamas and was not bad, all things considered.

Let me add, however, that The Bahamas is not Mo-friendly. There are no gay bars or clubs to speak of, and acts of violence perpetrated against suspected gay people are not immediately punishable - as recently heard about in current events. And it doesn't help when local Nassau reporters write columns like this. Even the gay travel guide said to "think twice" before going to The Bahamas. But I never felt unsafe where we were, and The BF and I had some fun trying to pick out the other partnered Mo's.