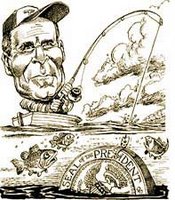 Recently, our ever truthful and wise Commander In Chief (and I don't mean Geena Davis) was asked by a German newspaper what were his worst moment in office and his best moment in office. His worst moment, he said, was 9/11. And understandably so, seeing as how he just had to sit in that school room all that time waiting for someone to come tell him what to do. That must have been very trying Junior.

But pertaining to his best moment in office, "W" said, "I would say the best moment of all was when I caught a 7.5-pound perch in my lake." Sweet isn't it?

Now, I ask you - if this man is willing to lie about the size of a fish he allegedly caught, can you just imagine how many other lies he has told to the American people, let alone the rest of the world, over the last 6 years??

Boggles the mind, doesn't it?