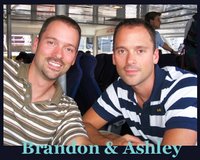 As reported by The BF last week, my roommate's restaurant, Hamburger Mary's Chicago, opened this past weekend to great fanfare and lines out the door. Mary's opening culimates the reason we moved to Chicago in the first place - or at least the reason Ashley moved here. Ashley did something I usually have trouble doing - taking a risk. Sure, I can deal with the drama once it happens, but Ash invited this into his life, knowing he could not only handle it, but surpass everyone's expectations.

Before leaving DC, Ashley was the General Manager for the hottest bar in DC, Cobalt. Ash had a great home, a great job, lots of money, and tons of friends - in short, a perfect life. And he voluntarily gave it all up to pursue a dream - a dream of co-owning his own business with his brother, Brandon. Ash quit his job, sold his house, said farewell to all his friends ('cept me) and moved to a place where he knew no one to start a business that could possibly fail. But he knew he could do it.

For months, I had seen Ashley sit at his computer designing each wall inside the restaurant: what it would look like, the colours, the decorations, the entire layout of the place. And some of his designs looked ... well ... questionable. But I had seen first-hand how Ash is always able to view the bigger picture. He has a great talent for seeing a finished product at the very beginning.

When he first bought the old house back in DC and asked me to move in with him, I attempted to talk him out of it. I just didn't see how it could be what he envisioned. But a little over 18 months (and alot of white plaster dust) later, he had created the gem in the crown of the neighborhood. His one task instantly raised the property value of ever house on the block.

So in seeing his plans for Mary's, I knew that Ash had the bigger picture in mind. And when I walked into the place a few weeks back before it opened, I was amazed at the finished product. It's truly a place you have to experience instead of just hear about. I am so proud of him for doing what he did, and accomplishing his goal, and living his dream.

We should all be so fortunate, and gutsy, to live like Ashley. Sometimes you have to give it all up in order to get it all back again, only better.