There are some foods in this world that you need instructions how to eat. Shrimp is one of those foods: pull off the legs, peel the shells, scoop the turds out (a la Tommy Boy), and pop it in your mouth (all but the tail, that is). This is how it's done, however no one ever told me this. I had seen people eat shrimp before, and I knew they did something to them before they ate them, but I never knew what that was. I just didn't pay that much attention. 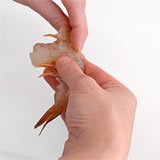 So when the time came for me to eat my first shrimp, I tried to figure out why people fidgeted with the little crustaceans before popping them in their mouths. I recalled a pulling motion, which means something had to be tugged off. I knew it wasn't the tail, cause that's the part that gets discarded back on the plate. I surmised that it must be the legs that get yanked off. So that's what I did - pulled off the legs and popped it into my mouth. That's right - shell and all. I must have missed the part where the shell was removed. It seemed a little crunchy, but then I figured - what do I know??

It wasn't until a few years later (that's right, I said years. I own it, okay??) that I found out that shrimp needed to be deshelled as well. It certainly made them tastier. But with no one to ever explain it to me, how would I ever have known?

Which brings me to my latest culinary foil - edamame.

The BF eats Chinese food about 12 times a week. Specifically, food from Joy's on Broadway. More specifically, the cashew chicken from Joy's on Broadway (he eats so much I swear the man shits feathers and nuts). One day during a phone conversation, as I was kvetching about trying to eat healthier, he introduced me to edamame. Edawhatme? Soy beans in a pod, he says. They are healthy and good for you, and they are tasty. So one night, walking back home from my EL stop, I popped into some random Chinese take-out place and got an order of edamame to go.

With a spring in my step, I confidently walked the rest of the way home secure in the knowledge that I was eating healthier. I got home, opened the container, picked up a pod, looked it over, sniffed it, looked at it again, and just popped the whole thing in my mouth. Admittedly, it didn't taste very good. That pod was tough. And really hard to chew. It took me 15 minutes to finally get it broken down enough to swallow. And there was still a container full of these things!

I wondered how The BF could eat them. I sadly had to toss the entire thing in the trash - bummed that my attempt at healthy eating was now going to drive me to either White Hen or McDonald's for dinner. In a phone conversation later that night, I told The BF about my foils with the soy pods. When I got to the point about how tough they were to chew, he said,

"What a minute, you didn't try to eat the whole thing did you?"
"Well yeah, what else was I supposed to do?"
"You're supposed to just eat the soy beans inside and throw the pod out!"
"Um ... hello ... you didn't tell me that part!"
How are you supposed to know this stuff if no one tells you? It's not like edamame, or shrimp for that matter, come with directions on the box. I am sure there are more foods out there that I will be brave enough to try, and then ridiculed for not knowing how to eat them. Such is my life. Trying to eat healthier is going to kill me.