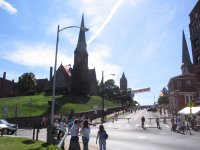 Also while home this past weekend, I attended Heritage Days, a street festival in the neighboring town of Cumberland. I was looking forward to attending for a few reasons: 1) my folks have been after me to go to this thing for several years and I just never made it home to go; and 2) being out of town, I was missing Midsommarfest in my Andersonville neighborhood this same weekend. So Heritage Days seemed like a nice compromise.

Let me say on the outset, that it is sad when something that was once great has lost so much of its appeal. An old train station. An abandoned drive-in. A moss-covered antebellum house. Tom Cruise. And it would seem that Heritage Days is heading in that same direction. 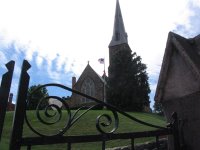 What was once a thriving two-day festival has become a weekend event that is slowly dwindling away. I can remember conversations with my folks about how they went to Heritage Days and bought all kinds of things or sketched ideas to re-create in their woodshop (my dad does all the sawing and assembly and my mom does all the painting). This year I walked around with them and absorbed their disappointment over the fact that every year, this festival gets smaller and smaller, with less interest.

I also think that vendors who are selling their wares at these festivals have forgotten that it's a street fair and not a real extension of their businesses. People don't attend events like this to purchase expensive items. It's all about funnel cakes and stuffed animals and arts & crafts. There was one tent where nothing we could find was under $85.00. Where was the tent where I can get my name carved out of wood to use as a keychain for $2.oo?? Where are the painted switchplates for $3.00?? Where was the hot dog/soda combo for $4.00?? My mom bought two orders of fries and a bottled water - it cost her $14.00! 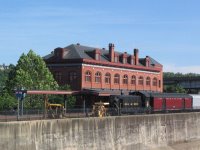 And there was nothing particulary 'heritage-ish' about this festival. No speeches were made (like something about where Cumberland came from and where it's headed), nothing about the history of Cumberland (which is actually steeped in US historical data). At one point, there were two major cities in Maryland - Baltimore and Cumberland. The former is of course nationally recognized as a tourist destination, sponsor of major athletic teams, home to top notch hospitals and universities. Cumberland, like the drive-in, ended up forgotten.

How did this happen. I ask - what did Baltimore have that Cumberland (named after the son of British King George II, William Augustus, the Duke of Cumberland) didn't?

Cumberland was built on the site of the old Fort Cumberland, a launch pad for British General Edward Braddock's ill-fated attack on the French strong-hold of Fort Duquesne (located on the site of present day Pittsburgh) during the French and Indian War. It was also an outpost of Colonel George Washington during the French and Indian War, and his first military headquarters was built (and is still standing) there. During the Civil War Cumberland was a union stronghold and troops were garrisoned there to protect the Baltimore & Ohio Railroad. Confederate raiders routinely raided the city and in one daring raid by McNeill's Rangers kidnapped two Union generals.

Cumberland was a key road, railroad and canal junction during the 1800s and at one time the second largest city in Maryland (second to Baltimore--hence its nickname "The Queen City"). The surrounding hillsides provided coal, iron ore, and timber that helped supply the industrial revolution. In addition, the city was a major manufacturing center, with industries in glass, breweries, fabrics, tires, and tinplate. However, following World War II, it began to lose much of its industrial importance and its population declined from 39,483 residents in the 1940 census to fewer than 22,000 today. Today, the city continues to struggle with the challenges of transitioning to a post-industrial economy. And why?

Because not enough people cared. Just like at Heritage Days, fewer and fewer people got involved until eventually, this once great city was just completely forgotten. Once the industry pulled out, nothing came back to replace it. And it seems that even the people who decided to stay just gave up. And its a true shame.