Riding down 35 floors in the elevator the other day, I read on Captivate Network that some Illinois politician was stepping down from his position on July 31. The headline ended with this clincher: "his chief of staff planned to announce today".

My question was - didn't that just happen? 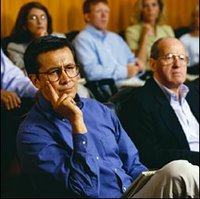 Can you plan to announce something, or did you just announce it? When reporters on news broadcasts tell us that a spokesman for an organization is planning to announce something later in the day, or week, or whenever - hasn't that already happened, only by the person who just reported it? Isn't that the news? Who wants to wait around and hear it again from someone else when you just heard it?

Unless this is a horse's mouth kinda thing, I would rather hear that something had been officially announced or discussed rather than hearing it's planned to be. I already have an agenda for my day, I don't need more added to it by people I don't know, won't meet, or couldn't care less about.

This type of redundacy is unnecessary. I've had more than one day ruined by the gossip that something BIG was going to happen later in the day, that so-and-so was going to do this or say that. And then, the situation become impotent and I'm left hanging - no pun intended.

I say we stick to the news that has definitely occured or is occuring as we speak, and let's just not worry too much on news that may or may not happen. Especially something as trivial as a person quitting his job.