Last Wednesday, I joined friends Jessica and Neil at Crew (that's right, a sports bar) to watch the long-anticipated season premiere of Project Runway 3. And it did not disappoint. The usual suspects are present: stalwart Tim Gunn, uber-German Heidi Klum, and judges Michael Kors and Nina Garcia. The producers and casting agents of PR have come up with a formula that works well. While getting to know the cast, it was easy to identify their personalities by comparison to the casts of previous seasons.

Along the vein of Austin Scarlet from Season 1 and Andrae Gonzalo from Season 2, we now have Malan Breton, a talented, flamboyant eccentric who seems slightly off-balanced emotionally, but centered creatively.

Cockey, rebellious, over-confident yet extremely talented - Season 1 gave us Kara Saun. Last season there was Santino Rice. And this season we have Jeffrey Sebelia.

But who is this year's Daniel Vosovic - the shy, mousey, hidden gem who coverty grew into stud muffin du jour? I say it's Bradley. For his sake, I hope he is at least 1/2 as talented as Daniel. And while I just want to hug Robert, I don't think he will last the length of the show. Just a prediction.

As far as last week's winner - I was very disappointed. Even though the judges liked it, I had to side with Tim Gunn and say it was a dress made out of a big piece of fabric. And I mean - there is NO way that was the first dress that queen ever made. Repeat for emphasis - NO WAY. 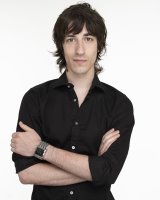 But the REAL dish is the catfight going on between Tim Gunn and Daniel Vosovic. Remember how chummy they were at the end of last season when they went shopping together to pick out Daniel's outfit for the runway showing? Notsomuch. Tim has been quoted as saying that Daniel is a "terrible diva", while Daniel calls Tim a liar, in so many words. Apparently they have since made up - but a runway catfight is still juicy stuff folks.