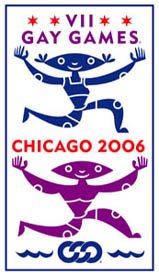 This weekend, the Gay Games and more than 11,000 gay athletes will descend upon Chicago to compete in such butch events as rugby, ice hockey, and wrestling, and also other "sports" like darts, ballroom dancing, and billiards (I'm petitioning for hopscotch to be included in 2010).

Personally, I don't support the Gay Games. There! I said it. I own it. I liken the Games to the war in Iraq: I support the players, but not the game. The athletes here, like the soldiers there, have my admiration and, to some extent, my sympathies. But the Games, like the war, just seem pointless. While many will support the athletes by volunteering, attending the events, and snorting happy powder at the inevitable circuit dances, I tend to not support large events or situations that decide to include only certain facets of the population based on race, gender, or sexual orientation.

While I completely applaud the athletes who posess such drive and determination, I have to wonder if their impending victories will not feel a bit, um . . . skewed? That is to say, if you want to compete in an event like diving, do you want to be the best diver you can be, or the just best gay diver who just shows up that day? There are no qualifying tests or preliminaries for the games. I could just show up at the Men's Rowing Competition (even though I have never done it before), and if no one else shows up that day or I compete against, say, a gay quadraplegic, I go home with a gold medal (the winner of the 2002 Gay Games Women's Figureskating Medal won despite the fact that she cannot spin or skate backwards. So I ask you, is that still considered figure skating??). The BF writes about this on his blog, and as he is a nicer person that I, he explains it with more tact.

As another example, I also don't support the idea of a monument to African American World War II Veterans. Unless I am missing something, there is already a memorial to World War II veterans (and quite a beautiful one at that) on the mall in DC that pays homage to ALL those men and women who gave their lives and served their country during that war. Is it really necessary to segregate a portion of the population for the same event? Black people didn't fight any harder than white people in that war, so what gives? I feel the same way about the Women in Viet Nam Memorial. There's no doubt that women were strong contributors to that conflict, much like they are today in Iraq and the Middle East. But a separate monument to them in DC - in a city that is so monument heavy they almost don't even mean anything anymore - just seems unnecessary.

Some will argue that the Games allows everyone to get a chance to be represented. But for regular mass competitions (for example, the Olympics), being gay does not disqualify you from competing in athletic events. Now, being athletic and very open about your sexuality might cause you some trouble, but actually being gay does not disclude you from qualifying.

When you are competing (or fighting, for that matter) alongside your fellow man, does it really matter what your gender or race or sexual orientation is? Don't you strive to be the best at what you do, and doesn't that desire accompany the belief that you want to compete against the best, so that you can be included in the big picture? Perhaps if the athletes who compete in the Gay Games are using these events to better themselves in order to progress to a national or international level, then I do support their efforts. However, if this is the pinnacle of their achievement, I can't help but wonder if they don't feel just a little slighted.

I realize that not everyone gets to go to the Olympics, but everyone gets a shot at it. And if you don't get included because of your ability, then THAT should tell you something.