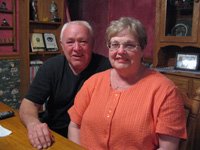 Tomorrow, August 26th, marks my parents' 45th wedding anniversary. I am super proud and tremendously grateful for the example they have shown me. I'm sure it has not always been an easy road, but 45 years later they are each other's best friend. Aren't they cute?

My mother was a painfully shy teenager, my dad was a bit of a hell raiser. They met on a blind date at "Teen Town", a weekly Friday night dance held in a large room above the fire station. They weren't there to meet each other - they each went with a friend who was meeting someone else. Dad says he took one look at her in her red sweater and fell instantly in love - he says he can still see her standing there. My mom, on the other hand, needed more convincing. Dad, it seemed, was a little too rough around the edges for her (apparently not ALL women love a bad boy). My dad had to really clean up his act before Mom would even grant him the first date. They dated for 4 years and got married in 1961.

Theirs is a fairy tale marriage of sorts - rarely spending a night apart except for an occasional hospital stay; doing wood crafts together in a workshop they created in the backyard; she bakes/he barbeques. They have 4 children whom they raised to be very independent, yet appreciate a strong sense of family. And they have 8 grandchildren that made my parents even more loving than they already were.

Mom retired about 5 years ago but Dad is still working at 65 (Mom won't let him retire because she said he will just sit around and do nothing and that's not good for him - besides, she adds, he will just get on her nerves). She spends her day tidying their house, working on projects she makes for herself, going to Curves 3 times a week, and doing a load of laundry every day (how two short people can create one load of laundry every day is beyond me). Dad is basically just a PR man at his job now - he knows everyone in the county and vice versa. He's been asked a hundred times to run for office, but he was always afraid it would cut into his time with his family.

My siblings and I gave them a party for their 25th anniversary, and then another on their 40th - just 6 weeks after Dad's quintuple bypass. Mom says she doesn't want a party for their 50th, but Dad says he does (I guess sometimes you just can't take the bad out of the boy). Of course we will have a party for them -- how could we not?

They have been wonderful role models for me on how to compromise, accept, argue, appreciate and love. I count the success and endurance of their marriage among my most treasured things.