A Bike Ride ... And Reflection 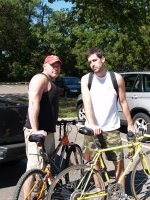 This week is very reflective for me. It was a year ago last Wednesday that I had my heart attack, and it will be one year this Saturday from my heart surgery. A year ago everything seemed just a little bleak, but I celebrated my one year of better health this past Saturday with The BF by taking a 37-mile bike ride.

Now for some, that doesn't sound like much. Hell, there are people who can run that far (and for those people I now have more respect for the discipline and strength it must take to do such a thing). But for me, a 37-mile bike ride is the biggest physical accomplishment I have performed in many years. At the end of my day, I was admittedly too tired to be as proud of myself as I should have been. But in retrospect, I gush with pride over what I did. Well, what WE did.

The day started with The BF and I being driven several miles by our friend Matt (this is him), to the intersection of Devon and Milwaukee and the beginning of the North Branch Bike Trail. Our goal was to ride to the Chicago Botanic Gardens, approximately 15 miles away. At the onset, I was a little nervous. Fifteen miles seemed so far to go when the crux of my distance biking amounted to the 4 mile stretch between The BF's condo in Boystown and my house in Andersonville. But the trail was pretty simple. There were a few challenging hills now and then, but all in all it was a good ride - and about two hours after we started, we arrived at the Botanic Gardens. 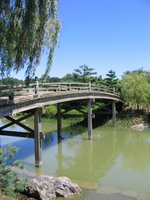 The Gardens are a must see - beautifully landscaped, serene vistas, tranquil waterfalls. It was the perfect place to wind up after being jostled around for the last two hours on uneven trails. My favourite part of the Garden was the Sensory Garden, where your senses come alive with smells and textures. There was actually a flower that smelled like chocolate (which The BF had to pry me off of cause we got to it just before lunch).

After about 2 hours of walking around the pathways, scultures and landscapes, it was time to bike back home at 3:00. This time, we would take the Green Bay Trail to the North Shore Channel Trail because it was further east and would bring us closer to my house. We had a little difficulty finding our way home because the two trails don't meet, and the map we had cut off before showing the beginning of the NSCT. But we had some fun going off trail and making a stop at the stunning Baha'i House of Worship in Wilmette. We eventually found the trail and continued home, arriving at my house around 6:30.

I was exhilarated but too exhausted to let it show. A 40 minute nap and a shower gave me just enough energy for The BF and I to head out to Mary's for dinner and then return home to watch Stir of Echoes on Netflix -- two Chicago-related things I recommend. 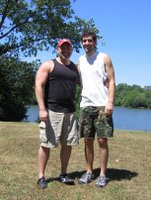 All in all, I could never have done it without the support and encouragement from The BF. He never doubted for a second that I could accomplish the bike ride. Hell, by the end of it, he even had me planning future rides. It was something I never would have attempted on my own, nor probably would have completed without his faith in me. So a big thank you goes out to him.

Not only was he a source of reassurance this year, he was there for me a year ago as well. And as things come full circle this Saturday, I am glad he's been with me throughout the journey.