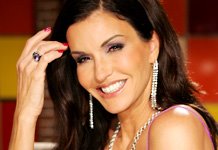 If she was my boss, I would hate her.

If she was my employee, I would hate her.

If she was my co-worker, I would hate her.

If she was my neighbor, I would hate her.

But as the star of The Janice Dickinson Modeling Agency - I love the shit out of her. She makes damn good television. She's a reviting, hypnotic, train wreck of a has-been who just refuses to go away. Her banal, screechy, rants are exhausting, tiresome, and entertaining all at once. She comes across as being fake yet genuine, callous yet loving, dishonest yet truthful. And as wild as she is, its easy to forget that in her hey-day, she was quite the beauitful young woman.

She is the first person to admit that she's a mess. She's not been shy about her journies with plastic surgeries, 3 divorces, countless sexcapades, and previous alcohol and drug abuse. Along the way, the self-proclaimed "first supermodel" (I actually think that title belongs to Lauren Hutton) has acquired tons of ego, but somehow taste has eluded her. But she is a survivor. Gay men dig her because she can be bawdy and brash while dripping in diamonds and couture (or maybe that's just why I dig her). But to bring it back to my original point - she is just damn good television.

Her show ended Tuesday night, but I am sure re-runs will be out there and I think another season is in the works. This is her third reality show, which is triumphant for a woman whose reality changes minute by minute, and is practically unsure what the word "real" means.