The 25th Annual Northalsted Street Fair, otherwise known as Market Days, was held this past weekend in the Boystown neighborhood of Chicago. Bigger and more popular that Gay Pride, Market Days is a strip of vendors, bands, shows, food, beer and (most predominantly) flirting. Eight blocks are closed to traffic on Halsted Street, Chicago's gayest corridor.

Before moving here, I had attended 3 other Market Days weekends. Each year, a group of friends would host me for a weekend full of laughing, partying, dancing, eating, and the occasional (albeit temporary) tryst. This year, I got to play host instead. Two friends from NYC, Michael (otherwise known as Mr. So I Like Superman) and James journeyed west to partake in the bacchanalian weekend.

First of all, it was great seeing Michael. Last time we were together, it was just 5 weeks after my surgery last August. The first words out of his mouth this time were "You're so big!" (but since he said it with a smile on his face, I am assuming it was a compliment). 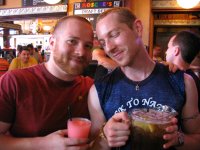 Michael, being a sketch comedy writer, is just hilarious to be around. He views everything as if it's a 4-minute SNL skit. People who read his blog regularly but have never met him are completely missing out on the delivery experience. Michael says he wants to begin a video blog because it will eradicate any possible misconception that he is an aloof, withdrawn, masculine man. I've never seen so much hand-fluttering as this past weekend. His rubber facial expressions are comical, priceless and adorable. 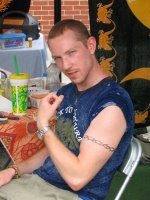 James is, quite simply, a cornball. A self-described white rapper/actor from Buffalo, he is one of the few people I have met with an honest "what the hell" attitude. When James sees something he wants, he goes for it - be it meeting a hot guy, getting a tattoo, or drinking Long Island Ice Teas out of a pitcher. James completely lives in the moment, and the idea that burned hot in his brain will fade to obscurity within minutes, instantly replaced with an even better idea. When his sly smirk is accompanied by a glint in his eye - watch out.

It was a great weekend with much laughter, too much food, tons of alcohol, new friends, old friends, theater (The BF was kind enough to give us freebies to Blue Man!) and broad smiles. The weather was great and it was one of those weekends you hated to see end. The good news is that it all comes around again next year. The bad news is that the boys went back to NYC. And I swear that it won't be another year before Michael and I see each other. Good friends should try harder.