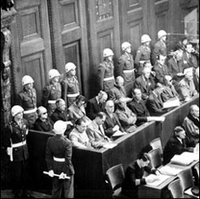 Beginning in November 1945, the Nuremburg Trials were held in Nuremburg, Germany, prosecuting the officials involved in World War II and the Holocaust during the Nazi regime. Twenty-four of the most important captured leaders were tried at what was known as the Trial of the Major War Criminals Before the International Military Tribunal.

Here are the definitions of each indictment:

1. Participation in a common plan or conspiracy for the accomplishment of crime against peace.

A crime against peace, in international law, refers to the act of military invasion as a war crime, specifically referring to starting or waging war against the integrity, independence, or sovereignty of a territory or state, or else a military violation of relevant international treaties, agreements or (legally binding) assurances.

2. Planning, initiating and waging wars of aggression and other crime against peace:3. War crimes:

War crimes include violations of established protections of the laws of war, but also include failures to adhere to norms of procedure and rules of battle, such as attacking those displaying a flag of truce, or using that same flag as a ruse of war to mount an attack. The definition of the term "war crime" usually varies between trials to convict the defendants with a more specific crime that they may have committed.
It comprises such acts as mistreatment of prisoners of war or civilians. War crimes are sometimes part of instances of mass murder and genocide though these crimes are more broadly covered under international humanitarian law described as crimes against humanity.

A crime against humanity is a term in international law that refers to acts of murderous persecution against a body of people, as being the criminal offence above all others.

So now I ask you - why has George W. Bush not gone on trial?