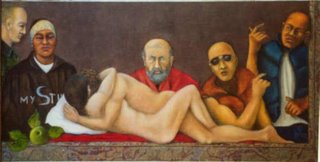 Here is my take on the whole PDA thing (and by PDA I mean Public Display of Affection, not personal digitial assistant). I am totally for it. I think it's fine. I hate seeing it. Ok, the truth is, I am not sure where I stand on this issue: when I see it happening, it sometimes bothers me, but when I am doing it I am not even considering what those around me might be thinking.

I think there are levels of acceptable PDA. For example, I don't need to see two people going at it on the train. In the morning. Before I've eaten. And they are both ugly (that's right, I am talking to YOU TWO on the red line who get on at Sheridan at 7:13am). Actually, the only acceptable PDA on the train in the morning is a quick goodbye smooch from one person to another. That's it, folks. Save the rest for later. You don't need to be holding hands or sleeping on each other - we can all tell you are a couple.

Actually that used to be my stand on PDA. I figured it was more for the benefit of those standing around rather than the two people engaging in it - like marking your territory so that everyone can see that this is YOUR property and no one else can step foot on it. You may as well just whip it out and pee all over the other person to leave your scent (although I am quite sure that happens anyway).

But my attitude softened somewhat as I got older and less defensive. My saving grace is that I have an aversion to being touched by people I don't know well. That, coupled with just being so darn cuddly-looking, has created some tension for me in public places. I don't like being groped and grabbed by people, namely men. True, my arms are quite large, but believe me when I tell you that, believe it or not, they feel like arms (I am out for a night with my friends, not a science project for sensory development).

I am not the guy you would ever see making out with someone in a public place, be it a bar or even on the street. Hell, I cannot even remember the last time I left a bar with someone I wasn't dating (when single, I keep that stuff kinda private - I don't want the bar queens keeping track of who I am "leaving with" that night). The extent of my PDA is perhaps a quick kiss now and then, some hand-holding, and possibly some back-rubbing. And it's not about marking my territory as much as it is about the fact that The BF is just so damned cute I can't keep my hands off of him.