Hello everyone. My name is Dop. And I have paruresis.

Whew! It feels good to admit it out loud. Well, sorta out loud. At least it's out there (no pun intended). I am not sure when it happened really, but somewhere in my adult life I became unable to unrinate when in the presence of another person, save with whomever I am in a relationship (that's when I know I have achieved a level of comfort with my partner. Some guys mark this time by farting in front of each other without thinking about it -- I pee.)

Paruresis is the medical term for "shy bladder syndrome", a social anxiety disorder in which a person is unable to urinate in a public restroom. According to a 1997 Harvard University study, approximately 17 million Americans suffer from this phobia. It affects about one to two million Americans so significantly that it impairs their lives and forces them to seek treatment. There is actually a non-profit organization located in Baltimore that provides information and resources to those afflicted with this problem. 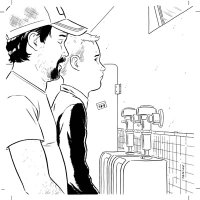 It can be a crippling nightmare to be out in public and have to urinate, but unable to do so. Perhaps it is performance anxiety of some kind; perhaps it is the proximity of so many penises all at once; perhaps its because I think bathroom functions are just very private matters and are not to be shared with anyone, specifically strangers. Whatever the reason my psyche has chosen, I simply can't pee in public. Psychology says that in people who suffer from paruresis, the body senses the public restroom as an unsafe place. Adrenaline starts pumping as it would in a "fight or flight" situation. The result is that the part of the body that controls urination (the parasympathetic nervous system) is temporarily inhibited or suppressed.

More frustrating are those times when I am at the urinal, struggling for things to happen, concentrating even, and someone walks up to the urinal beside me and just lets go a gusher like its his job. It is the only time in my life when I actually experience penis envy. Why can't my penis behave the same way?? And to drive the nail even further into my coffin, these other men (could be strangers or someone I know) will just begin talking to me as if we are both standing in a lunch line or waiting for the next "L" train. And I marvel at how they can do this; not only can they just let go with the yellow flow, but they can talk to another person while doing so. I stand in awe (and standing in a men's room with your mouth open is not a good look).

Sometimes using a stall instead of a urinal will help. But only sometimes - for when I hear other voices, it becomes increasingly difficult to function. I can be in an empty restroom and going through the process just fine, and then stop in mid-stream when I hear the restroom door open. Sometimes, just the idea of another person being around me while I am peeing is enough to keep me from doing just that.

So onward I trek on my journey to relieve myself (ok, I meant that pun). Perhaps one day, the problem will just disappear and I will be able to pee like a normal person. But then, this is ME we are talking about ......