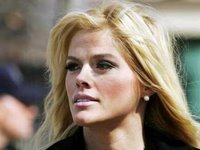 Up until a few days ago, I was in her corner. I figured she was just misunderstood, a product of bad publicity and unfavourable television editing. Actually, I thought she was just getting a bad rap, as fallen beauty queens always do.

And then I read THIS

At first, I couldn't imagine what kind of mental state she must be in - still in the hospital after giving birth to her daughter and her 20 year old son drops dead in her room next to her. The joy and misery combination must be unbearable, or so I thought. But while still in mourning, she strikes a tasteless and almost unbelievable business deal with In Touch magazine for $600,000 to publish the last photo taken of her now dead son, Daniel. Even though she said she couldn't remember him dying.

When she married the 89 year old oil tycoon, I just figured she saw it as her chance to get out of what sounded like a pretty desperate life. I might have done the same thing. So I quietly rooted for her, as I sometimes do for the underdog. She saw a chance and took it without really hurting anyone.

But to find out three days after her son's death that she struck a deal with a magazine to publish what should be the most private and treasured photograph of her life - well, it makes me sick. Rest in peace, Daniel.