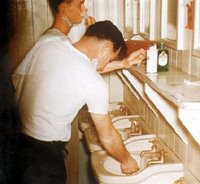 Back in college, I had a little trouble getting stoned. Not sure why, but I would sit with my friends and watch them all ascend to LaLaLand and I seemed to stay sober as a judge. “It never happens your first time,” I would hear. But after time number 8, we figured something was wrong. BF#2 said that I was perhaps thinking about it too much, whatever that means. But we decided that I perhaps needed a little more guidance on the subject. So BF#2 enlisted the aid of the biggest pothead we knew on campus. He said he would get me higher than a kite if I, in turn, taught him how to do one thing...

Being as I was one of the few guys in school with a decent amount of facial hair, he figured that I was a pro at this and wanted me to impart my wisdom because he always seemed to be ripping his face apart when he attempted to shave. So I asked him what his procedure was and he told me that he basically just took a razor to his face. I found it interesting when he explained that he was raised by a single mother and no one ever showed him how to properly shave his beard. And I was struck by how many others like him there probably was – boys, raised by single women, who are either too proud or too embarrassed to ask their mothers how to begin being a man.

(Let me flash forward here for a second and say that The BF has got to be shaking his head at this. He thinks I shave too quickly and too dangerously. But I almost never knick or cut myself - its just years of practice and good technique.)

So that following Saturday afternoon, Chris – the stoner dude – called me in my dorm and asked me for a lesson. We were an odd pair as we ventured to the Piggly Wiggly (I went to a southern college) and bought a decent razor, shaving cream, exfoliant and after shave balm. Then we returned to his dorm and I walked him through the process:

Later that evening at a house party, Chris approached me with a broad grin, a smooth face, and a beer. He thanked me for helping him out and not making such a big deal about it. He said he didn’t have a dad or a big brother to teach him how to do a lot of things. And he appreciated my help. Then he gave me the beer, put his arm around my shoulders and led me outside.

And that night, I got higher than the .