So Sunday I took what was to be my last ride on my bicycle - unbeknownst to me - because today some asshole has STOLEN MY BIKE, which was chained up outside of the Bryn Mawr "L" stop. AARRGGHH!! I was going to get a new bike in the spring anyway . . . but still! I bought this bike about two years ago right after another asshole had STOLEN MY BIKE which I bought a week after yet another asshole had STOLEN MY JEEP. This makes the fourth bike in 7 years that some asshole have stolen from me. Clearly, I have no luck with vehicles.

My bike ride on Sunday lasted several hours, most of which was riding the 47 miles of roadways through Rose Hill Cemetery in Chicago. One of the largest (if not the largest) cemeteries in Chicago, it boasts a few famous people (hot dog king Oscar Mayer being one of them) and more than a few odd monuments and tombstones.

This is the Pearce Monument (click on images to enlarge): 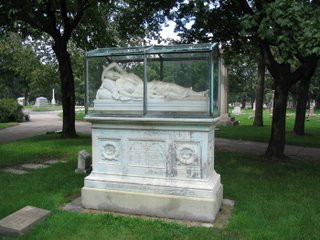 which houses a sculpture of Frances M. Pearce and Frances Pearce, a mother and child who died in childbirth. It was more than just a little creeptastic. I swear the woman looked like she was going to open her eyes at any minute. 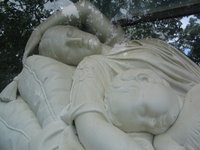 And there were some other monuments that I thought were kinda interesting, like this one, that I have titled Not Anymore. Check out the name: 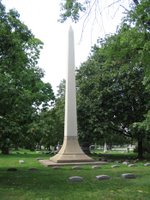 And this one I call The Death of Home Cooking:

And this one I call Adolescence in Hell: 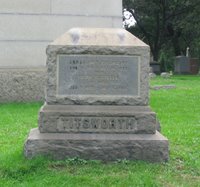 Remember when you replaced all your cassettes with CD's? This is where they are buried:

And my personal favourite tombstone: 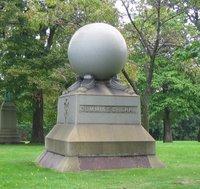 So now I am a pedestrian again and will have to wait until next Spring before I can once again ride through cemeteries and make fun of dead people. Until then, I will just have to spend more time with The BF who has STOLEN MY HEART - and that's a whole different kind of fun.