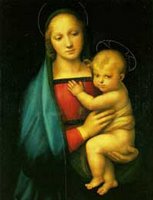 Madonna has a child without being impregnated. No, it's not the story of Jesus's birth, but the latest in Hollywood accessories.

It has been made official (after a few weeks of lies) that Madonna is adopting a child from Africa. I have a few problems about this:

1) While I am well aware that is it easier to adopt a child from a foreign country than it is in the United States, there are still plenty of parentless children right here in our country, some living in as impoverished conditions as those who live overseas. It's not like Madonna NEEDED a child, as some childless couples do. She already had two and it's not like her clock is ticking. She could have waited the appropriate amount of time to adopt an American (or even British) child.

2) The boy she adopted, David, isn't even parentless. He has a father and a grandmother. Sadly, his mother died a month after he was born and he's been raised so far in an orphanage. My question is why isn't the father raising him? As a parent, that's your job - to raise your child. It's your obligation and responsibility, no matter how difficult. The father is 32, so I would guess the grandmother is only in her 50's. Between the two of them, surely they could care for one child who is only a year old.

3) This seemed to be less about adopting a child from an impoverish country and more about Madonna's publicity. Otherwise, she wouldn't have have trekked over to Africa several times to visit several orphanages. If your heart tells you to adopt an impoverished child, then you take the first one you see. You don't go shopping for a child like he's a handbag. 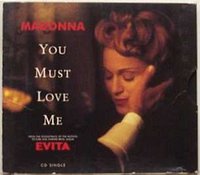 4) Malawian law specifically prohibits non-residents from adopting Malawian children. They feel it is better for a child to stay in his/her own environment, surrounded by his/her own kind. I wonder if Madonna chose this country simply so she could be the only western person in the world to have a Malawian child?
Adoption of any kind is near and dear to my heart. And I do applaud Madonna for reaching out and doing charity work with her megamillions. But I also believe that charity begins at home. In 2002, there were 20,009 foreign children adopted by U.S. families. That's just over 20,000 U.S. children that could be living in loving family settings instead of orphanages and foster homes.

Admittedly, it is sad that these children are born into such horrible conditions. But the thread of our country is unraveling because of a lack or absence of parenting ability and skills. Plucking a child out of his environment in a foreign country, no matter how despicable, might make your soul feel warm, but it's little consolation to the countless number of US children without parents, the 600,000 children in the US foster care program, and the several thousand childless couples who would love to have a child of their own but cannot employ the same means as a pop star.
.