Mark Foley Is A Pedophile

In old news this week, U.S. Representative Mark Foley was discovered to have sent lascivious emails to teenage male pages while working at the Capitol in DC (you can read here how it all unfolded). He resigned in shame, as well he should, and has dealt yet another blow to the already deservedly embattled Republican party of ne'er-do-wells.

The NEW news is that Foley blames his troubles on being molested by a priest when he was a teen himself. What a convenient truth that would be. Is this where we shake our heads and replace the blame for his perversity on someone else? Foley won't say which church he belonged to, nor would he provide the name of the clergy who molested him. Which leads me to believe that he is lying, again, and is just hoping for sympathy. Let's face it, he's already proven to be morally corrupt.

Where was Mr. Victim a few years ago when the priest molestation scandal was rocking the country? Why didn't he mention it then when it actually could have helped other men who had gone through the same thing? Why did he wait until it would garner pathos for him to suddenly reveal an allegedly horrible youth? I have no sympathy for Foley (who co-chaired the Congressional Missing and Exploited Children's Caucus, by the way) because he should know better. 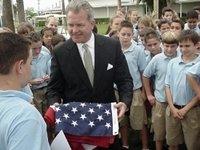 And with typical "it's not us, it's them" fodder, House Speaker J. Dennis Hastert (himself in the hotseat for not doing anything about this situation when he first found out) has stated that he blames Democrats for making this public so close to election time. "Democrats have ... put this thing forward to try to block us," Hastert told conservative talk show host Rush Limbaugh yesterday. My question is - Shouldn't the public, and the law, have been made aware of this anyway???