Last week while in DC, I managed to catch my first glimpse of LOGO, the all-gay cable TV channel. I was interested in seeing what programs the channel had chosen and what the whole experience was about. And frankly, there was nothing on there I couldn't already watch on BRAVO. 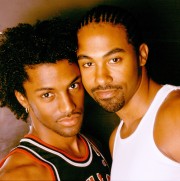 I don't see a need for an all-gay cable TV channel. During the few days I watched it, there was not one informative program or groundbreaking show that I thought justified having a channel devoted to gay themes. And speaking of groundbreaking, I caught a few episodes of Noah's Arc, the series that centers on black gay men and their relationships. Personally, I didn't find this show all that interesting either.

First of all, I didn't get the message from this show. True, it is the first time television has shown sex between two black men, but one of the central characters isn't sure he's gay, even though he is dating Noah, who couldn't be gayer. I was kind of hoping to get an insight into what is it to be black and gay, which I thought was the purpose of the series. But nothing transpired in the 6 episodes I saw that was specialized to being both black AND gay. And even worse, after two seasons, both the writing and the acting were embarassing.

In one episode, Noah gets gay-bashed by three white guys at a gas station. Interestingly enough, there was no race card played here. There was no mention that the three men were white and that it could have been racially motivated. Which seems odd to me because THAT is how it would be played in real life. Also, Noah apparently suffered three cracked ribs from the ordeal. But still with bruises on his face, he sits and stands from the couch as if nothing has happened. Apparently, neither the actor, director, or scenewriter has ever had a cracked rib - it's hard to breathe, let alone move. And with three? Fuggitaboudit. 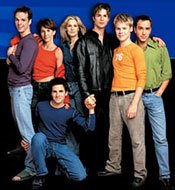 It was hard not to compare the show to Queer As Folk (which actually had some complex storylines compared to Noah's Arc) and was certainly "better acted". And while QAF was certainly groundbreaking in its portrayal of gays and their relationships, Noah's Arc just seems like an excuse to watch brothas get it on.

Which, I guess, has its place.