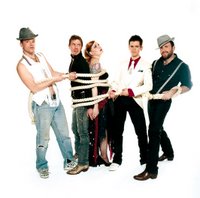 The BF and I were uber-excited about seeing the Scissor Sisters in concert this past Sunday at the Riviera. I have seen the Sisters twice before in DC, and I enjoyed the idea of introducing their live performance to The BF. He has shown me so many new things this past year, that I felt really good about acquainting him with this. We bought their new CD and listened to it constantly for a week, just to be familiar with the new songs.

And then I got an email on the Saturday night before from my friend Matthew telling me that the concert had been cancelled. I immediately went to the Sisters' website for confirmation. And there it was. Paddy, the drummer, was being treated for back pain and three tour dates were postponed until possibly the end of the tour, which will probably be next year sometime.

Admittedly we were pretty disappointed. I got the tickets more than a month ago and was really looking forward to sharing this experience with not only The BF, but also my roommate and a bunch of other friends too. But we ended up at Crew anyway and The BF, Jessica, Neil, Kevin, Will, Chris, Scott, and Chuck all drank ourselves into the night and had a really good time otherwise.

I guess it's more about who you are with, than where you are.

(Today's lesson is brought to you by the letter S, the number 9, and Fat Tire Amber Ale.)