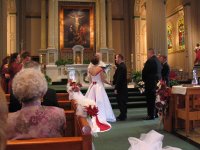 I went to a family wedding a few weekends ago. I don't go to many weddings. It's not because I don't have any friends, its just that all of my friends seem to be gay men who aren't getting married. The last wedding I attended was in 1994 when my youngest brother Mike got married. Twelve years later, here I go again.

Kati is my cousin-once-removed. She is the daughter of my eldest cousin Cathy. Because Cathy is so much older than I (17 years older) and Kati is so much younger than I (15 years younger), they are more like sisters than cousins to me. Watching Kati get married was the same as watching my baby sister get married. She is the first person who's birth I remember. I mean, I can remember other people being born, but I actually remember the minute she was born. I remember where I was and what I was doing when I heard the news, the same way the Baby Boomers remember Kennedy's assasination. 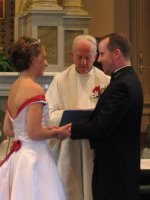 Kati was an adorably beautiful bride. She looked very happy and very much in love, as did her new husband Mark. It was a Catholic wedding, so there were alot of ups and downs (and if you're not Catholic, that means there's alot of standing and sitting and kneeling. It's like being at a college football game: stand up, sit down, fight fight fight!) And Kati managed to turn it up a notch by wearing a gown that was not entirely white. It was the first time I ever saw red incorporated into a wedding gown. Loved it!

It was a lovely ceremony, and I am very happy Kati married Mark, whom my family adores. He realizes how close Kati and I are, so it meant alot to him, too, that I returned home for the wedding. With this wedding, I feel more of a gain than a loss. I haven't lost a baby sister - I've just gained (another) little brother.
.