A few nights ago while waiting for The BF to finish tube-talking, I decided to pick out a movie for us to watch later that night. This is always a challenging task for me, because The BF and I don't always agree on my movie choices. There is always a trace of trepidation in his voice when I tell him I found a movie for us to watch. But this last choice turned out to be a winner.

Shakespeare Behind Bars is a documentary filmed at Luther Luckett Correctional Center in Kentucky, about a group of convicts who annually stage one of The Bard's masterpieces. In this instance, they are performing The Tempest, a story which pits virtue against vengeance - a lesson each of the inmates needs to learn, ironically, in order to be paroled back into the outside world. 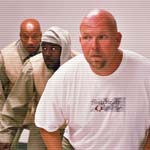 We watched in amazement as these deviants of society, this band of criminals, thugs and thieves, who, the director of the play points out, would have been adored by Shakespeare himself. The Bard's plays were written at a time when actors were considered the lowest form of occupation, second to hookers. And during the rehearsals, each inmate discovers something in his character to which he can relate, something that he sees in himself as well, perhaps even discovers for the first time.

The inmates seem both supportive and to have a genuine affection for each other - some of them having spent 20 years or more within the walls of this one institution. We found ourselves rooting for their paroles, and felt a slight weight of disappointment when some were denied.

It's a interesting film, that chronicles the journey each of these men takes towards absolution, be it from their victims, themselves, or whichever higher power to whom they pray.
.