The Dumbest Christmas Song Ever Written 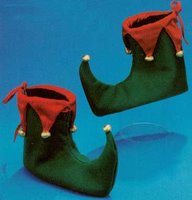 Now I am as sentimental as the next guy, especially when it comes to the combination of mothers and Christmas. But there is a Christmas song I have been hearing over the last 5 years or so that wins the Yuletide Velveeta Award for its oustandingly cheesy attempt at melodrama (I hate forced sentiment). And it's not enough that it is a crappy song, it's also a book, and a television movie starring Rob Lowe.

Obviously written to attempt a tug at the heart strings, "Christmas Shoes" simply falls way short and lands someplace between hokey and trailerpark. The premise: a little boy in a store on Christmas Eve buying a pair of "Christmas shoes" for his dying mother.

If I was that close to death that my spouse would tell my children on Christmas Eve that there's "not much time" left, the last thing I want is a pair of new shoes - especially the kind that my 8 year old kid would buy me. I'm all for keeping children occupied during a crisis, but sending your son out to buy your wife a pair of pumps to wear when she "meets Jesus" is just a little too bizarre for me. The weird thing is that this song sounds alot like the Fruit of the Loom commerical where the Apple sings "You Can't Overlove Your Underwear" (only I like the underwear song more).

Here are the lyrics to "Christmas Shoes":