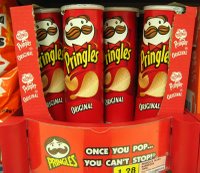 Pringles are my favourite potato chip brand. I dig the shape, I dig the packaging, and they are handy to eat while driving. As a neat freak, I like how easily they fit together. As a romantic, I adore how they spoon each other in the can. Yeah, you still get some broken ones, but by and large you still get a good many chips for your buck.

Mostly, I dig the flavours Pringles come in: Original, Loaded Baked Potato, Sour Cream & Onion, Jalapeno, Chili Cheese, Pizza, Cheddar Cheese, Ranch, BBQ, Salt & Vinegar, Pizza-licious, Spicy Guacamole, and the Reduced-Fat and Fat-Free versions of the same. There are even Pringles with movie trivia printed on the chip. Talk about a party!

If only Pringles made Onion & Garlic flavour, my life would be worth living.

But I have recently discovered that my favourite chip manufacturer has been cheating me out of sampling some pretty great flavours of chips, because there are some flavours that are offered in other countries that are not available in the U.S. Such as: Paprika flavour in Finland. Ketchup in Canada. Smoked Bacon in Australia. Cool & Hot in Brazil. There is also an Aroma line of Pringles with flavours like Red Pepper with a Touch of Olive Extract (Great Britain) and Red Paprika (Deutschland).

Man I am jealous!

Christmas is coming and I've been a very good boy. So if there is anyone living in South Korea, England, Israel, Japan, Finland, France, hell even Canada that would like to send me a few cans of your specialty chip...
.