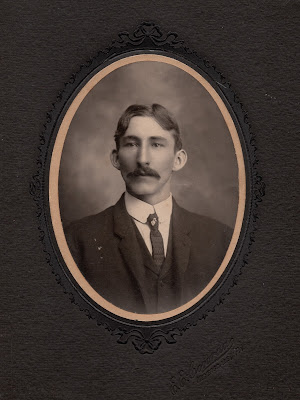 The search to fill in the branches of my family tree began in 2002 with the discovery of this photo:

This was all I had to go on; there is no date on the photo, but there is an engraving in the matte that states the photo was taken by E.E. Conrad, the leading photographer of his day in Meyersdale, PA.  Upon discovering the photo, my mind boggled.  Who was this dashing man with the very familiar eyes?  Where did he live?  What did he do?  What was his story?  In an almost obsessive state, I set out to try to find the answers to these questions.

My father's genealogical history was murky. I've discussed it before on here.  Most of the older generations passed away while my dad was still young.  He mostly only knew nicknames of people, not their legal names.  And their relationships to each other were incestuous at best.  By that, I mean that there were two families that intermarried several times down the line, where the siblings of one family married siblings in another family.  This was not an altogether unusual practice in the 19th and early 20th centuries, especially in small, rural/farming communities.  The pickings might be unfortunately slim; your nearest neighbor might live a mile away; your schoolhouse might have 10 kids ranging in ages 6 to 14, five of whom are your own siblings.

But after more than a dozen years researching both my parents' respective family trees, pouring over census records, visiting cemeteries, connecting with genealogists, researching ancestry websites, and submitting for copies of birth/death/marriage certificates, I have successfully researched the trees back 14 generations.  The farthest person I have found is Collin McKenzie, born in Cromarty, Scotland in 1630.  Oddly enough, both my father and mother's lines descend from this man and his wife, Isobel.  But that's another blog to be written later.


Out of the 14 generations, I place William Amos Troutman in the 6th generation (our new two great-nephews are the 1st). The first thing I learned about William was that I couldn't find any information on his parents or siblings.  There is no birth certificate on record for him.  So it took reading several censuses and obtaining a copy of his death certificate to put it all together.

Amos Troutman and Mary Rickard (or Richard or Reichard) had a tryst in 1876, with William being the illegitimate outcome.  I know Amos and Mary didn't get married because Amos is listed on the 1880 Census as being single and living at home in Southampton, PA. The 1880 Census also states Mary, still listed with her maiden name, as living with her parents, Jacob and Mahala Rickard, in Larimer Township, PA.  Also in the Rickard household was a 4 year-old William. It would seem that William was born out of wedlock in 1876 when Mary was 18 and Amos was 20.

What is also interesting is that they (or she) named the baby William Amos Troutman.  The name "William" is prevalent in Amos' family line:  his father, grandfather, and great-grandfather were all named William.  Therefore, baby William Amos was named after his father and grandfathers.  I find this odd since the couple didn't marry.  The romantic in me wants to think that Amos and Mary wanted to or perhaps planned to marry but were forbade.  Although the realist in me believes Amos didn't want to marry Mary and she named the baby after his father and grandfathers out of spite.

(It's important to note here that also living in the Jacob Richard household was a 1 year-old boy named Harvey Deal, who like William, is listed as Jacob's grandson in the 1880 Census.  It would appear that Harvey was the son of Mary and some other young man, perhaps with the same name as the boy.  We can deduce that Mary got around.)

At this point, Mary disappears from the history books.  Amos goes on to marry Isabel "Belle" Bluebaugh in 1882.  They had 9 children together.  I have no information as to whether William and Amos ever stayed in touch or if William even knew his half-siblings.  They all remained living in Somerset County in PA, however.

I am guessing the photo of William above was taken around 1900 when William was 24.  I can't think of a reason why he had the photo taken as he was not a professional.  As there was no national census between 1880 and 1910, I can only assume he was a laborer all his life.  He could neither read nor write, except for signing his name.

Some more information on William: 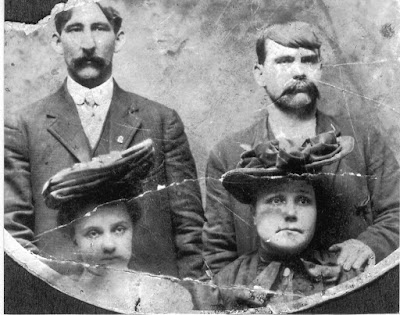 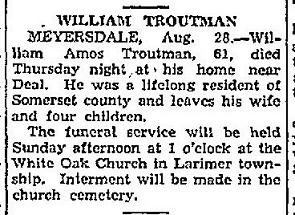 William Amos died on August 26, 1937, at the age of 61 - two years before my father, his first grandchild, was born.  According to his death certificate, William died as a result of carcinomatosis (cancer in his stomach, liver, and lungs).  Cecelia was 45 years-old when William died and would remarry.  Contrary to what is written in William's obituary, he was not a lifelong resident of Somerset County.

Per the obit, William is buried in White Oak Church cemetery in Larimer, PA, sharing a tombstone with two of his children, Anna Marie and Alverta - both of whom were complete surprises to Dad, Mom, and my sister when we visited the cemetery for the first time in 2005. 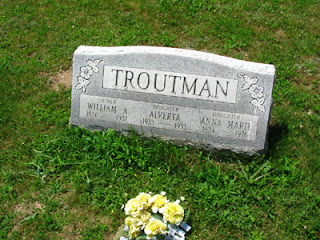