So Saturday, April 26th started out like any other weekend day.  KB and I were hosting our "Second Time in the Second City" party - an open house event to which we invited just about every person in Chicago we knew and had missed during our time in Miami.  While it would take weeks to get around to visit everyone, we thought this would be a better way of seeing out closest friends sooner.

Kevin jumped out of bed sometime before 9AM and was already cleaning the living room.  I was a little surprised he had gotten such a jump on this as we had the whole day to start tackling the cleaning project, not that our placed really needed much primping.  He jumped in the shower as I was eating breakfast and, when finished, told me that he didn't squeegee the doors because he figured I would be getting in soon enough.  I thought showering this early when we had cleaning to do seemed weird, but Saturdays are my days for trimming the beard and shaving the head.  It's a lengthier process than the usual 10 minutes I take in the morning, so I figured maybe it wouldn't hurt to get it done now.

While I was in the bathroom, I could hear Kevin using a staple gun someplace in the condo.  Now most people would probably poke their heads out to find out what's going on.  But since I never really know what project he is doing or what's floating around in his ridiculously creative brain, I simply ignored it.  I mean, it's Kevin.

So after finishing all my duties in the bathroom, I opened the door and Kevin met me with a pair of jeans and a tee shirt and said, "Here, you might want to put these on."  Is someone here, I asked?  Just put these on.  So I got dressed and walked out into the apartment and noticed that Kevin had secured this to the wall: 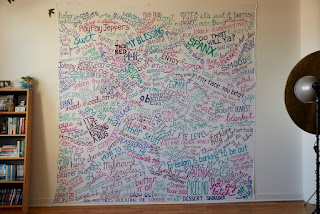 It's a king-size 9'x9' sheet on which Kevin has written every inside inside joke he and I have been sharing for the past 8.5 years.

Needless to say, I was flabbergasted.

He then turned to me and said a few private things about how much I mean to him, and then while giving me his most loving hug, he asked me to marry him.  And I got to say the word I've been waiting to say for the last few years:  yes.  Of course, yes.

He then presented me with a small black box tied with a white bow.  This is where I got really thrown.  Kevin and I have been casually talking engagement and marriage over the past year as we've watched other friend-couples go through this same rite of passage.  Each one we watched, we compared how that one would parlay into how we would do ours.  And the one thing we pretty much agreed upon was no engagement rings.  So as I developed what I later dubbed "stroke face" because I know my face fell and froze in a sagging position, I went along for the ride and opened the box.  Inside was a "ha-ha"note whose message was essentially "this ain't us".  As I stood there deciding whether to laugh or cry from it, Kevin gave me the real engagement present: a small box which housed a white tee shirt with the simple saying "he said yes".  I looked up to thank him and he unzipped his hoodie to reveal himself wearing the same tee shirt.  I can't remember if the champagne came before the tee shirt or after, but I know there was champagne. 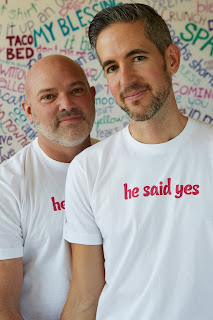 And then, almost on cue, Kevin goes to the front door and in walks our friend Jessica Sladek to take our photos.  She took over 300 and there are some great ones of us smiling and being happy, but I chose one that I really liked.  We aren't cheesy or overdoing it.  It's just us, happy and very content with life.

We called our families who are all very happy for us.  We've been part of each other's families for many years.  Between us, we already have 13 nieces and nephews and 2 great-nephews.  But now we will each officially gain another mom, dad, and a few sisters and brothers.

Oh yeah, and our party went on as usual.  Our guests, who were coming just to welcome us back to Chicago, were surprised that the event was also our ad hoc engagement party.  It made it all the more special that we could share it with our friends.

I guess I am now experiencing all the feelings that anyone who goes through this wonderful experience feels:  How on earth was I lucky enough to find someone who thinks I am as terrific as I think he is?

No date has been set yet, but we are giving it a lot of thought.

Things I Have Since Learned: