Having bought our cute little house in the north section of the Lincoln Square neighborhood a year ago on March 16th, our One-Year House-iversary of the day we moved in and started living here is March 21st.  It's been a great year in our home and we absolutely love it! With not many exceptions, our weekends have been spent both inside and/or outside the house, adding our touches and making our already-cute house even cuter, in ways that only WE can do.

It was exciting to initially walk through the house with our realtor, Susie Kanter from Dream Town, who was amazing at giving us tips and suggestions about what we could do, and really helped us see the potential in the house.  She helped increase our excitement and interest.  PS - we love Susie!

On a late-afternoon walk around the neighborhood a few Sundays ago, Kevin and I  tallied up what we have actually done to the house in the past 366 days (considering we are in a Leap Year), and we were impressed by how much we've accomplished.  While the house has caused us to be a bit less social, the work we continue to do on the weekends is paying off in both short- and long-term ways:

A lot of time was spent upgrading a space we've never had before - the garage!  When we first moved in, just about everything we had to store went into our rather large 10'x10' laundry room which only housed a washer and dryer (more on that later).  Admittedly, the garage needed some love.  The structure is sound, but the original non-automatic wooden bi-fold garage doors had seen better days.  So we spent a few weekends scraping the old paint off the doors, then Kevin wood-puttied the hell out of them, doing the same to the side entrance door.  I contacted the Historic Pullman Foundation to find out the names of the three paint colors they require homeowners to use (a dark olive green, a lighter green, and a brick red.  Interestingly, they don't have names for them, but they did send me paint chips in order to buy matching colors).  Since our house is red brick, we chose to use the two shades of green on our garage doors, the window trim, and the front porch and steps.  Then we added fascia and gutters to the garage and moved all of our storage into it, which still left room for the car and for Kevin to create a workbench and tool storage area.

We removed a few trees, pruned the rest, and then pulled out a fugly holly bush in the backyard.  We put in new edging pavers around the flower beds and the sidewalk, and replanted flowers in one section of the garden and vegetables in the other.  We reseeded portions of the yard and managed to get grass to grow where there had been none.  After we stained the wooden deck, the backyard was basically complete . . . for now.

In the front yard, we painted the porch, ceiling and steps in the Pullman green colors, secured a flower box on the porch railing, pulled out another fugly holly bush and replaced it with azaleas, mulched the shrubs and the Crabapple tree, and power-washed the front sidewalk.  We scrubbed the rust off and repainted the mailbox and Kevin made a new faceplate for our house numbers.  The glass-block window on the porch had a closed-off vent window in the center, and we replaced it with a piece of clear, textured stained glass. 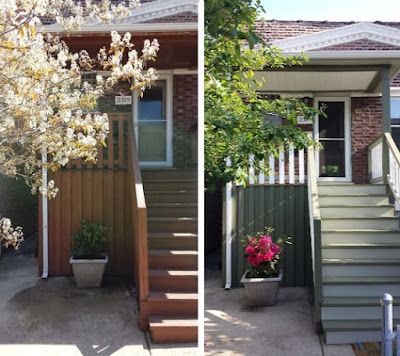 Our main floor is "upstairs" which contains our open-concept living room, dining room, kitchen, and small office space.  There's also a full bath and pantry/closet.  We didn't have to do too much to this level except paint.  The previous owners had painted the entire space in flat sage green which made it look dingey.  So we whitened it up and brightened up the kitchen.


We decided to install a water meter which meant moving the water main access, which just so happened to be under the bed in the guestroom.  The previous pipes, we discovered, were PVC that had been artistically painted to look like copper; this fooled us, our realtor, our home inspector, and even the plumbers at first.  To bring it up to code, all the PVC had to be replaced.  Bigger project than we anticipated, but everything needed to be re-routed and the 2-feet thick concrete in the downstairs made it impossible for the new pipes to run underground.  So we ended up with a bit of a steam punk look in the guestroom.  The pic on the left below is from the original listing; OUR guest room is on the right.

Most of the inside work we've done has been on the downstairs level.  First thing, of course, was painting.  Again, the previous owners had used the same flat sage green in the den and a flat light blue in the two bedrooms.  Flat paint - why?  Why, why, why?  So we chose a light shade of grey and freshened up the white for both rooms.  Kevin sewed curtains for our bedroom windows.  And after that, we carpeted the entire concrete downstairs with charcoal carpet tiles.

Our plan is to embark on the most aggressive project to date; switching out the tiny full bath on the lower level with the larger laundry room next to it.  Along the lines of "you don't really know someone until you live with them" in this case would be "you don't really know your house until you open up the walls".  It's going to be interesting, and it's going to require A LOT of jack-hammering since the downstairs floor is solid, and I do mean solid, concrete. In order to move the plumbing for the new bathroom, we will need to bust up the concrete in order to plumb the new space. I'm not particularly thrilled about the mess this will make, but you gotta crack a few eggs to make an omelet, right?  Someday...

It's been a really fun year, working on the house and making it what we want it to be.  We've done just about all the work ourselves, but I need to take a minute and thank Kevin's parents, Pat and Dianne, for driving out and pitching in a few weekends.  They've helped with the yard, the garage, and have offered to pitch in on the eventual bathroom renovation.  It's always great to see them, but when they show up with tools and workclothes, it's even more appreciated.  It's been great having them helping us out now and then.

Reflecting on what we've done this past year excites us as to what we will accomplish next year.  Oh, and there are still MORE projects, like new concrete sidewalks in the backyard, new fencing in the front yard, and a slight renovation in the downstairs den.  And I think Kevin wants to spend more time creating his work space in the garage.  I'll update on those projects too.

For now, we will keep plugging away, learning more about our little 120-year old house, ourselves and each other.  When we chose this house, we chose "wisely", and it's fun to see what we can turn it into.