When I was a boy, I spent many weekends with my Granny at her house, which was mostly within sight of my parents' house one street over.  I ate many meals with her and I always loved her dishes.  They were the only thing I actually would have loved to have when she passed away in 1987, but they went to my uncle who had been living with her at the time.  He eventually moved away, got married, then divorced, became infirm, and then passed away himself a few years ago.  Where Granny's set of dishes eventually went is anyone's guess.

Back then, Granny bought her dishes a few at a time from a traveling salesman who would come to the house on a regular basis.  I don't know how she bought them (all plates first or all one color, etc), but I know it was in pieces - not all at once like we do today.  That's how she bought a lot of things.  I remember as a kid watching her talk to visiting salesmen who were selling just about anything.  That's how things were done back then.  With 9 kids, it wasn't like she could just go shopping, and there weren't many stores in her very rural neck of the woods.

So resigning to never actually owning her set, I decided to just buy a set for myself.  All I knew from my own mother was that they were melamine dishes from a company called Melmac.  So I set out to find them.  And I learned that Mother was half right.  The company that made the melamine dishes was actually named Kenro, one of the great melamine manufacturers that outlived most. One may argue it was their timing or their keen ways of marketing and management that sustained them during economic change. 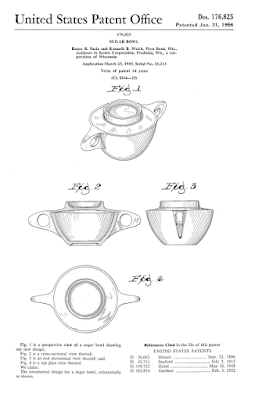 Kenro was named for it's owners and inventors, Kenneth Welch (president) and Roger Sacia (vice president).  Their first plant, in Freedonia  Wisconsin at 200 Industrial Drive (established in 1953), turned out 24 hours worth of plastic products, and 2 Million dollars in annual sales by 1958.  The company was so overwhelmed, a second location in Galesville, WI was in swing by the end of 1958, set to open in February 1959.  By 1959 a lot of earlier plastics companies were on their way out due to rising production costs and a general lack of love for melamine by consumers. Kenro's successful lines were Holiday by Kenro, Debonaire Melmac, and various kitchen plastics.  Granny's dishes were the speckled Holiday by Kenro line, specifically red, turquoise, yellow, and white.

Kenneth and Roger decided to patent their technique for METHOD AND COMPOSITION FOR THE PRODUCTION OF SPECKLED PLASTIC WARE on April 6, 1954  This patent would technically prove them being "first to patent the speckled ware" although they weren't exactly first to invent it.  The diagram at right is the patent for the set's sugar bowl, considered futuristic in its day.

Identifying Kenro items is easy, since most items are clearly marked on the bottom.  What may be confusing is dating. Some will list patent numbers on them, and some will say patent pending. The patent pending is obviously older and scarcer because the company had applied for a patent, which wasn't granted for the items before production began.  Later items show the original patent which does not necessarily mean they were produced on that date of the patent, but is simply referring to their original patent. You will see script and print backstamps for Kenro. 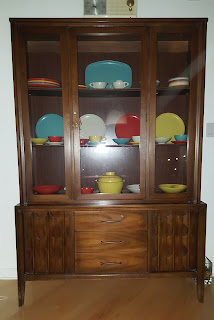 So now, after several years of scouring Etsy, eBay, and just about every vintage retail shop in every city we've visited the last few years, not to mention the numerous times I made a bid on eBay only to lose out at the last minute, I was FINALLY able to purchase a large set of Kenro Holiday dishes for my very own.  They arrived earlier this week and are instantly among my personal treasures.  They aren't Granny's, but they remind me of her especially today, December 14th, on what would be her 107th birthday.

Still not completely sure if these will be every-day dishes, used for special occasions, or never used at all.  But buying something I may never use isn't like me. I do plan on adding to the collection - not insanely, just a piece here and there as I find it.  Kenro Holiday dinnerware is a lot like melted plastic popcorn: so much of it was made that it's hard to know what all is out there and available.  And like those window decorations, I'll buy what I like when I see it.

But for now, I'm just going to sit at the dining room table and enjoy the view.