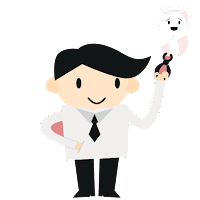 T'was three weeks before Christmas and all through my mouth
Was a mess of great doing; my teeth work had gone south.

I'm sure no one can quickly forget that my 2016 was dominated by one story.  The year will no doubt be remembered as "The Year of the Sinuses".  On my last visit to my ENT, he told me that the root of my problem (pun intended) was a tooth root that had broken off in my gum and punctured my sinuses, allowing bacteria from my mouth to get into them and cause recurrent infections.  But of course it did.  So now a trip to the dentist was in order if not downright necessary.

I'm not proud to admit that my last dentist appointment was in July 2005.  Problems with my teeth have been brewing for many years and I've just not done anything about it.  I guess I figured that there was no real hope of saving my teeth, so I just planned on waiting it out until I would need a mouth full of implants, partials or full-on dentures.  My siblings all have great teeth, but no amount of  dental hygiene was going to prevent mine from deteriorating.  And I figured that as long as the front ones still looked good, I could buy time.

I don't know why, but there is a lot of emotion centered around my face.  When I went to pieces on my first follow up appointment with my ENT, I remember telling Kevin that I would have a similar reaction going to a dentist.  I don't know why this is.  I don't recall having a bad experience with a dentist per se.  Perhaps some of it is the fact that over the years, I've quietly dealt with some severe pain in my mouth as teeth broke off, nerves became exposed, and gums bled.  And also, perhaps some of it - or most of it - is just plain embarrassment.  I don't seem to have this same problem when my eyes are examined; there's just something about my nose and mouth.

Back in July 2005, though, I took steps to fix everything.  I scoured DC for a dentist whom I would be able to trust and would work with me to fix my issues.  I remember the dentist asking me what my greatest fear was.  I said, "Having to leave this office without teeth in my mouth".  He said, "What if I promised you that would never happen?"  And I felt better.  So we made appointments to get things done.  My goal was to have it all complete before I moved to Chicago in September.  And then I had a heart attack, which nixed everything.

But now it's time to take care of it.  Indeed my health depends on it.  So I did about a week's worth of research and found a dental practice.  I met with the dentist and I trust him - for the most part.  I shared my fears and emotional distress and we talked through it.  I go in for a cleaning this week, but the real work will start in January when my dental insurance renews.  Not surprisingly, I need a lot of work done.  But the goal is to save as much as possible and then deciding if I want to do anything cosmetic.