You can forget everything I've ever posted about being mostly of German descent.  After spending the last decade-and-more years researching my family tree, and finding most branches leading back to Deutschland, I've come to learn that, by comparison, my chromosomes tell a very different story than what my research has indicated.

For Christmas last year, Kevin bought me DNA testing from 23AndMe, a DNA testing service that breaks down your global ancestry by percentages, among other things.  It took about 5 weeks but the results arrived recently and I learned some interesting things about myself.  For example, below is my DNA break down: 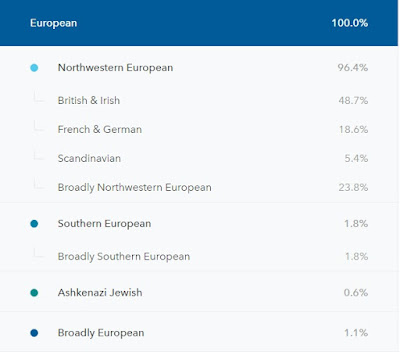 So yes, I am still 100% European, but only about 19% German.  This is beyond puzzling to me.  Two of my G+parents were for certain born in Germany: 1) My Mom's maternal grandmother, Catherine Groeter, was born in Dusseldorf and came over on a boat when she was 4 years old, and 2) Mom's paternal great-grandfather, Justus Rase, was born in Freudenthal, coming over before the age of 10.

Of my 16 Great Great Grandparents ("GGG"), 8 of them (50%) are of German descent, and 4 of those are 100% German, meaning both parents came from Germany.  So it would seem that my German heritage would be more strongly represented in my DNA -- my guess is to the tune of about 60% at least.

Now let's compare this to my British/Irish (and Scottish) heritage which is a whopping 49% in the chart above.  So nearly half of my DNA is from British Isles ancestry.  Comparing that to the 16 GGGs, only 4 of them have ancestry dating back to Great Britain and only 2 of those are 100% from the British Isles.

I also need to account for 2 GGGmothers, Emma Burton and Ida Porter, and 1 GGGfather, John Winebrenner, whose ancestry is completely unknown to me.  All three of them are on my Dad's side. But I guess I can deduce based on the evidence that they should/could be between 50%-100% British, Irish, and/or Scottish.

I've compiled a visual of my GGGs for myself to help make sense of it all.  You can see the preponderance of German flags to flags from Britain, Ireland, and France.  The blank squares are unknown.  The top flag represents the paternal side of that person; the bottom, the maternal side.

I actually thought that DNA testing would answer more questions than it's raised.  Not so.  As I've researched, I've been happy to find surprises, like the higher-than-expected number of Irish ancestors that I introduced on here last year and the year before.  But not as surprised to learn that I am not as wholly-German as I always thought.  Or at least my DNA tells me.