Having grown up in the Appalachian mountains, I'm used to seeing wildlife around where I live: groundhogs, bats, deer (LOTS of deer), field mice, snakes, turkeys, and yes, even bears.  But last week while visiting my family in Maryland, I came face to face with an animal I've often heard about but (I don't think) ever saw in person until now.

Mom and I had exited the house at the same time: she out the front door to get in the van to go visit my Dad, and me out the backdoor to Dad's old workshop to look for something Mom couldn't seem to find.  After a few minutes of searching, I could hear Mom honking her car horn.  So I walked around the house to find out what was going on. 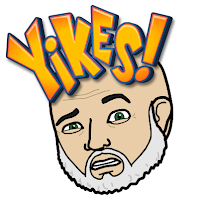 When we came into each other's view, I yelled, "What's the matter?"  She was sitting in the van with the window down. "Do you see a raccoon," she asked?

I entered the house and closed the screen door behind me.  Mom and I continued to talk until, suddenly, out waddled the raccoon from under the van.  This is where I think I've never seen on in person before because it was MUCH larger than I expected it to be.

Several things are weird about this whole scenario:

1.  Seeing a raccoon in person.  They are bigger than I thought.  I think I put them in the same category as small rabbits.  But these things are large - bigger than a typical housecat.

2.  Seeing a raccoon in person in the daylight.  Raccoons are nocturnal mammals, avoiding human interaction as much as possible.  This little fellow (I just assume it was a male) was not the least bit intimidated or afraid of me.  He slowly sauntered over towards me at the door, despite my repeated warnings for him to walk in the opposite direction.  Raccoons never listen.

3.  The raccoon was injured.  He moved very slowly, not that I know the speed with which a raccoon typically moves.  But this little guy seemed to be nursing a back left foot.  I figured he had either fallen, was nicked by a car, or was in a spat with a dog or other creature.  Every few steps he would stop and just sit down, in no hurry to get anywhere. 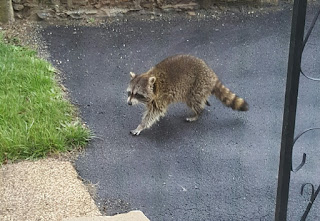 Mom had backed the van out of the driveway and had moved on.  I tried keeping an eye on the raccoon without him knowing I was there.  He seemed dazed and confused.  I felt sorry for him.

I eventually closed the front door and left him alone.  I probably should have called the Department of Natural Resources at that point (we eventually did, later), but it didn't occur to me at the time.  About 20 minutes later, I went out to my car and kept an eye open for him.  I saw him about 100 feet from the house, sitting along the side of the road, just looking around.  Not sure where he eventually ended up.