These days, diabetes is prevalent in American society for many different reasons:  some people are overweight, some people get it late in life, some people are genetically predisposed to develop it.  And it would appear that I am in the latter group.

Back in mid-April, I needed to see my GP in order to have blood labs completed for my upcoming (third and final) sinus surgery.  Most of the lab results were what I expected, with the exception of my glucose levels.  After staving off diabetes for years (I've been keeping records on my lab work for the past 20 years or so), my body finally tipped the scale. A glucose count that had been maintained at 103-110 (considered pre-diabetic) for the past two decades suddenly elevated to 286.  I had what my family calls, "the sugar".

How could this have happened when nothing in my lifestyle had changed?  Simple answer: because nothing had changed.

Realistically it's crazy, I guess, to think we can maintain ourselves year after year doing the same things, eating the same foods, getting the same amounts of exercise.  Our bodies change over time; they age and things start to break down - faster for some than for others.  MY body has been breaking down at a rate faster than others in my age group; I've often said I have the insides of someone 20 years my senior.  So naturally it made sense that I just couldn't keep doing what I had been doing all these years in order to maintain my health.  Things needed to change and I simply didn't realize it.

Back in my doctor's office, I was perplexed.  Why now, I wondered?  He asked who in my family has diabetes.  My mom, my dad, my brother, my sister...   For me it's genetic, as are most of my health problems.  And like those other health problems, I intended to fight this one too.  My doctor challenged me to lose weight.  In his office, I weighed 238 - again fairly usual for me.  But he wanted me to maintain 228 instead.  No more carbs, he said while he wrote out yet another prescription.  He said to me, "I know the last thing you want is to be diabetic, so I'm trusting you to take care of this.  I won't ask you to check your levels or monitor your sugar.  But I will ask you to download the MyFitnessPal app and keep track of your diet and exercise."

Which I did religiously.  What was fun about the app was that after I would input what I ate during the day, it would tell me what I would weigh in 5 weeks if I ate every day like I had that day.  It was somehow empowering.  And it worked. 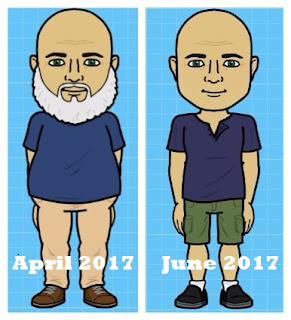 Eight weeks after starting the app, which helped me keep track of my calories, carbs and exercise, I weigh 219 lbs, for a loss of 19 lbs overall!  The other great news is that my glucose went from 286 to 117, and my cholesterol dropped 30 points.  My doctor took me off of the medication and now I will just keep using the MyFitnessPal app and getting regular exercise.

Throughout my life, I've had these resets:  I've used Nutrisystem a few times to lose weight, most notably the first time I used it in 2010 when I lost almost 50 lbs.  I've used it again now and then since to drop a few pounds here and there and to remind me what portion control looks like.  But then I fall off the wagon somehow as food is my crutch, my comfort.  But this time feels different.  This time, I know the consequences because I experienced them.  And while I have been pre-diabetic for the past 20+ years, there's something about having diabetes that triggered something in me mentally and emotionally.  I don't want to repeat those 8 weeks again.

I already have enough to worry about.