My Farewell To Jeff And Matt

This past week, the end of an era occurred upon the death of one of my closest and oldest friends, Jeff Widdows.  Jeff died unexpectedly last week of a massive heart attack while shopping in the local mall.  Attempts were made to revive him, but to no avail.  Jeff was 55 years old.

Jeff was part of an inseparable trio that consisted of Jeff, me, and Matt Bittner.  Matt passed away in December 2011 due to an undisclosed illness.  At the time, Matt was 47.

This leaves just me now - certainly not how I expected it to end and most certainly not this soon.  But even more unexpected was the turn our friendships took.  As close as we once were, I was estranged from each of them at the time of their deaths:  Matt stopped communication with both Jeff and me back in 2002 or so, and Jeff and I stopped communicating in 2012.  I actually wrote about my lack of communication with Jeff in a blog post titled, Facebook Ruins Friendships.

Perhaps the friendships had run their course.  Perhaps we each outgrew the others.  And perhaps living far apart put distance between us in more ways than one.  Maybe people really can't be friends forever, like you expect or hope.  But for one, brief, shining moment, we had Camelot.  I learned a lot about myself and life when I was with them.  And the events this week have caused me to reflect on some pretty great memories of our adventures and excursions throughout the 1990's.

From that first night in September 1989, when we all converged at Deer Park Lodge (a neighborhood gay bar outside of Hagerstown, MD), we became an instant clique and would be constant companions for the next 16 years.  All three of us were living in Allegany County, MD when we met, and the goal was for all of us to get to DC within the next year or so.  And we put MANY miles on Jeff's Audi making the 2.5 hour road trip to DC as often as we could, either in order to jump-start our move or at least start making friends and connections in our eventual home.  I couldn’t possibly count the number of hours spent in a vehicle driving back and forth from everywhere we went; countless trips to the only gay bar within 100 miles of our homes; driving 300 miles round trip just to be on a gay bowling league in the winter and a gay softball league in the summer; several journeys to Rehoboth Beach in Delaware; two vacations to Disney World; not to mention the hundreds of thousands of dollars we spent on brunches, lunches, dinners and cocktails.  And when the time came for me to move first to DC and then to Chicago, the unimaginable amount of time we spent on the telephone, talking a few times a week, waxing sentimental on days gone by and planning our next great adventure.

Our friendship worked because we were the classic trio.  We were Dorothy/Blanche/Rose, Scarecrow/TinMan/Lion and Samantha/Charlotte/Miranda.  I'll explain: 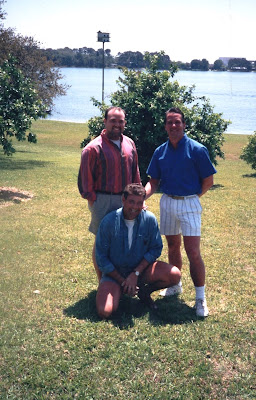 Jeff was the oldest, being five years my senior.  Of the three, he was the Scarecrow/Rose/Charlotte combination; he was the nice one.  Jeff was unselfish, being generous with his time and his finances.  Jeff liked taking care of someone and looking after people.  His was the first greeting card you received on your birthday or holiday, with certain words underlined in red.  And like the others in his combination, Jeff could be ditsy.  He had no experience with the gay scene when I met him, and I sought to change all that.  When I met Jeff, I immediately told myself, "I've just met my new best friend", and that's exactly what happened.  We needed each other in that capacity, and it worked out.
I actually had already known Matt, but not as a gay adult.  He was two years ahead of me throughout school and lived up the street from my family.  His older brother once dated my sister.  And I took over Matt's paper route for him when he went on vacation in the summers.  Matt was the Lion/Blanche/Samantha of the group:  full of vitality, vanity, and wind, but insecure underneath and desperate for attention and affection.  I think being with me and Jeff helped Matt's confidence.  No doubt, Matt was attractive and could easily obtain any man he wanted - and we'd see him be successful at it over and over and over again.  I called Matt the "pretty one".  And along with those looks came one of the sweetest yet troubled souls I have ever known.

Which left me as the TinMan/Dorothy/Miranda - the (figuratively) heartless person who thought with only the brain and nothing else, using snide wit as both an attraction and deflection. I'd been told that I was a pussycat in a lion's body; but I wouldn't necessarily say that my bark was worse than my bite.  I just believed in being direct and honest with people.  I neither played games nor suffered fools. And I figured if people did not want to know the truth, they would not ask my opinion -- they would simply go to Matt or Jeff instead.

These two became my first REAL friends - people to whom I could say ANYTHING.  With them, I didn't have to hide who I was or change the gender when I spoke about someone.  My conversations with them were the first honest conversations I'd ever had in my life.  Over the course of our friendship, Jeff and Matt were there with me through my college education, 5 boyfriends, 9 jobs, and 12 apartments across 5 cities – not to mention all the stuff that both goes along with and comes in-between.  I figured we would be best friends until one of us died.  And now two of us have. 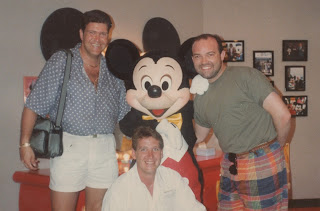 Despite that I'd lost communication with each of them prior to their deaths, I still feel an immense sense of loss; loss of what was as well as loss of what could have been.

Back in 1991, I wrote a story about the three of us that eventually became a chapter in a book about my life - most of which has been published on this blog at some point or another during the past 12 years.  We used to get together and I would read "our story" aloud over drinks.  And we'd laugh hysterically at jokes that only we got.

The piece I wrote about us ended with this paragraph:


Years from now, when each of us is paired with a significant other, we will leave our mates for three weeks each summer and meet at a beach house the three of us had purchased years prior.  We'll complain about the usual mundane things in life ("Andy just won't let me out of his sight for one second" or "Dan just keeps buying me the most expensive gifts" or "Frank has the highest libido of any man I have ever seen" ... ho-hum).  Our little houseboy, Pablo (one of Jeff's old tricks at that point) will make us cocktails as we lounge on the beach.  Jeff will drink his customary (and lethal) 151 and Coke, Matt will have his Canadian Club and Coke, and I will have my ever present Scarlet O'Hara.  After fending off young surfer hunks (who know us only by reputation mind you), we go into the house, eat everything in sight and talk about sex.  We then send Pablo to restock the liquor cabinet and the kitchen, we work out in the gym, relax in our jacuzzi, and prepare to party that night.  This will constitute the itinerary for the whole three weeks during the summer; also for the two weeks we'll spend in Vale during the winter, the two weeks in the mountain cabin during the spring, the two weeks at P'town during the fall, the occasional cruises to the Bahamas, the extensive shopping trips, and the lunches at Tavern on the Green (so now you see why we will need to have significant others -- to pay for all of this).

I'd like to think that they are both sitting on the lanai of that cabana, with Pablo refilling their cocktails as quickly as they can drink them, patiently waiting my arrival many years from now.  And there is comfort in knowing they have reunited.