It's been a while since I have posted anything here.  That is perhaps both a good thing and a bad thing.  Good, because it means that my life is uneventful and that nothing special is happening except the normal stuff.  And bad, I guess, for exactly the same reasons.  We did recently take a two-week trip to Europe, but (amazing as it was) that trip was well-documented on Facebook so I didn't see the need to rehash it on here.  And our Hallowe'en was pretty spectacular.  Between Kevin's house-decorating getting national exposure and our costumes basically killing it once again, it was another successful holiday in the books.  See for yourself: 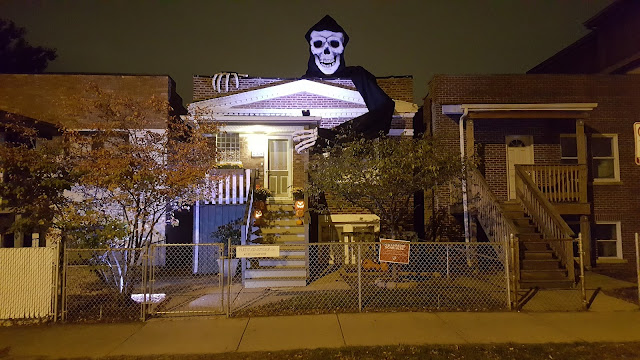 So life has been usual and normal.  Until last week.

It was Thursday morning.  I was taking the morning to go to the gym, come home clean the house,  and do some laundry and shopping in preparation of family visiting the following day through the weekend.  But before starting all these endeavors, I needed to take the morning "pit stop".  So I put some laundry in the washing machine and started it up, and then for some undetermined reason, I chose to use the bathroom on our main floor rather than our renovated master bathroom on the ground floor.

So I am sitting there, playing the daily game of solitaire on my phone when I heard a loud, ominous,  gurgling noise in the pipes.  I looked around quizzically. wondering what I had just heard.  And then I heard the noise again, louder this time.  A felt a wave of heat rush up my neck and into my head.  Suddenly, I felt a spray of water from underneath me while, at the same time, I'll-call-it "stuff" started flying out of the bathtub drain in the shower.  I was so overcome with shock I didn't know what to do next.  The gurgle started again so I jumped up and closed the toilet lid, only to witness another round of stuff volcanically spewing out of the tub drain.

It was like a scene from a horror movie.

Note: I'm calling it "stuff", but I mean water and excrement.  That's right - poop was flying out of my tub.  Actual poop.  Not just dirty water, my friends.  It was like someone hooked up a hose to a Port-O-Potty and let 'er rip up through the bathtub drain.  It spasmed out of the tub drain and flew up the shower walls, some even hitting the ceiling.  And because the shower curtain was pulled open to let light in through the glass brick window, the "stuff" flew all over the bathroom - on the walls, up the window, and on the tile floor getting down into the grout.

I quickly cleaned myself up and rain downstairs to turn off the water main (which had nothing to do with anything, but I didn't know what else to do) and shut off the washing machine.  I cautiously looked in the master bathroom and was somewhat placated to find that it looked completely normal; nothing had happened there.  However, some pipes were leaking on the floor so I started pulling up carpet tiles in order to stop the leak(s) from spreading.  Shutting down the washer seemed to fix this problem.

I immediately texted our plumber, Matt, with whom we developed a friendly relationship last summer during our main bathroom renovation.  Within 1 minute, Matt called me on the phone to tell me he'd be right over.

To speed up the story, I'll jump to the several hours later after Matt had deduced what had happened:

A blockage had formed someplace in the sewer outside of our house.  Because we had installed a pump system under the master bathroom due to its being below grade, the pump kept the master bathroom dry.  The pump collects all waste water used in the house.  Once the water reached a certain level, the system pumps the water up through the pipes and out to the sewer line with one huge gush.  On this occasion, the pump was filling quickly due to my doing laundry, so the pump kept pumping the water up and out.  But since there was a blockage, the only place for the waste water to go, then, was out of the pipes in the other bathroom - the one I was using.

Matt The Plumber ended up pulling up the toilet in the bathroom and snaking a pump down the drain to blow out the blockage, which he assured me was not caused by us.  Our pipes, according to him, were clean.  So I was at least appeased to learn that this was not our fault.  So about 4 hours after arriving, Matt left and I began the worst task I've ever had to take on:  cleaning it all up.

Here, I will admit that I lost count of the number of times I dry-heaved and/or gagged through the next few hours of my day.  Because it had been several hours between when this occurred and when I could clean it up, most of it had dried.  So when I re-hydrated it by cleaning it up, the smell seemed to intensify.  I was literally wiping shit off the walls, ceiling, window, soap, shampoo bottles, and floor.  I had to scrub the tile and the grout with a toothbrush.  I took down the shower curtains and washed them with the towels and rugs.  And even after scrubbing the bathroom, the smell still lingered - perhaps trapped inside my nose for the unforseeable future.  Later I bought a few bouquets of flowers and baked cookies in my attempt to rid the house of the smell.  Kevin said he could still smell it "a little" when he came home from work that evening.  But fortunately, the odor had dissipated before the visiting family arrived the next day.

I'm already squeamish when it comes to excrement and bathroom functions.  I am an admitted prude in that I can't even fart in front of another person.  Without doing a deep-dive into my psychoses, let's just say that, for me, bathroom stuff is very private, always has been.  So the fact that I had to spend so much time cleaning up what might not have even been my own excrement on my bathroom walls and floor . . . well it was a lot for me to handle.  And while I was cleaning, I couldn't help but consider all the "what if's":

What if I had simply turned on the washer and then left the house for the gym, which was my original plan before needing the "pit stop"?

What if I had not been home all day and the mess would have grown, spread and possibly flooded our main floor?

What if we didn't have such a great relationship with a plumber and I couldn't get anyone here to fix the problem for a day or more?

I've accepted that if this situation HAD to occur, it occurred at the right time and that I was in the right place despite how uncomfortable it all was.  I literally lived through one of my nightmares.  If rats had come up through the drain as well, all of my fears would have been faced at the same time.

I guess I should be thankful.