Last week while on vacation, I received a text from my friend Jeffrey letting me know that Carl had died suddenly following a seizure of some kind. 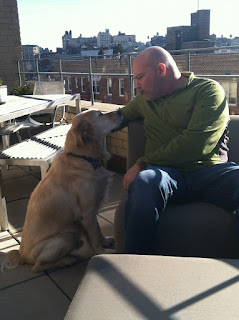 Carl was a Golden Retriever/Yellow Lab mix.  He was rescued by my friends Jeffrey and Michael, who were also the parents of Tucker, whom I also watched for several years when we all lived in DC the same time.  After moving to NYC, and Tucker had passed, a friend reached out to them to tell them about Carl.  At the time, they weren't sure they wanted to adopt another dog.  Tucker had been the love of their lives and the freshness of his passing was still looming large with them.  But the friend was apparently persuasive enough, and sooner than planned they adopted Carl.

Carl had been living on the streets somewhere in the Carolinas, eating pigeons and anything else he could get his paws on.  He was very thin when he moved to NYC, but within a few months of a completely changed lifestyle, he had put on a good bit of weight and much needed fur.  The guys quickly fell in love with Carl, but then so did anyone Carl ever met.

Despite how he had been living, Carl was the gentlest soul I had ever met.  I was fortunate that Jeffrey and Michael would invite me to NYC to watch Carl, just like I had watched Tucker previously.  Kevin joined me the first time we met Carl.  The guys were out and left a key with their doorman.  Kevin and I spent a few minutes fumbling with the keys in the lock, unable to get the door open. We figured the guys must be taking Carl for a walk since we didn't hear any noise from inside the apartment while we played with the lock.  After several minutes, we figured it out and opened the door to find Carl, just laying towards the door, front legs crossed, tail wagging, not making a sound - apparently entertained by our buffoonery.  He slowly stood up and crossed the floor to greet us.  For me, it was love at first sight. 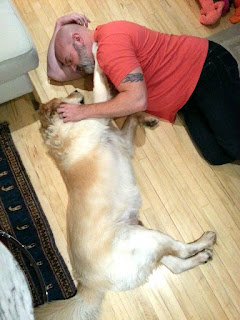 During my first walk with Carl, it didn't take long to realize that he was the unofficial mayor of East Greenwich Village/SoHo.  It didn't take long for Carl to establish himself and make friends in his neighborhood.  He had a walking path that he preferred and you just kind of loose-leashed him and let him lead the way.  He knew where to go, where he would get a treat or a belly rub.  Everyone knew Carl.  I'd walk him down the street and people would ask, "Is that Carl?" and as soon as I said yes, their demeanor changed and they greeted him the way you greet an old friend.  And Carl's tail would just constantly wag.

It was as if Carl realized how good his life was compared to what it had been.  He seemed grateful for the friendships and for the life he had, going from living on the streets to being flown in private jets from one home in LA to another in NYC.  I believe he knew he had it good; he had the best temperament of any dog I've ever met.

Along with Jeffrey and Michael, I imagine the entire neighborhood is feeling Carl's loss these days.  It was as if people were just waiting to see him, or that he had the power to improve their day just by walking by them.  Even here in Chicago, I can sense him gone.

I have to laugh a bit when I think of Carl and Tucker meeting up in wherever dogs' souls go when they die.  If you really believe that all dogs go to heaven, then I am imagining the two of them comparing notes on everyone they mutually knew - which is hilarious in thought because Tucker and Carl couldn't have been more different from each other.  Tucker was as eternal puppy, always a little needy, a bit  mischievous, disobedient, and impatient.  Carl was just the opposite: an easy going old soul, steady and stable, and would stand on a street corner for hours just waiting for you to take the first step.

And so the universe claims yet another kind, tender soul from my life, one that I was lucky the universe brought to me in the first place..  I wish him peace and send my condolences to Jeffrey and Michael, who plucked Carl from an uncertain future and showed him how to love - which he spent the rest of his life giving back to everyone else. 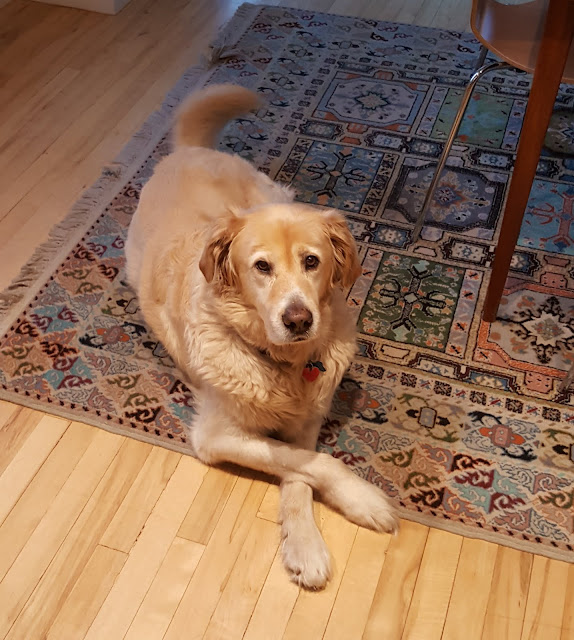