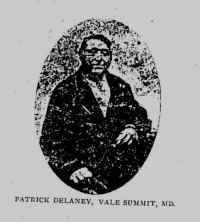 Last year, I introduced you to my mother's ancestors from Ireland, John and Jean Anderson. While my dad's lineage is mostly German, Mom's is a bit more diverse with some German, English, Scottish, and Irish.  The Andersons are not Mom's (and thereby, my) only Irish ancestors.  And while The Andersons came to America in 1722, there are still a few others who came to this country from Ireland more recently.


Mom's paternal great-grandmother, Elizabeth Delaney, is the child of two Irish immigrants, Patrick William Delaney (born in 1815) and Mary Cain (born in 1823). Both were from County Kildare in Ireland, which is located just west/southwest of Dublin city, and came to this country during the mass Irish migration, ostensibly to escape the Irish Famine, the dire economic conditions that destituted families, and social and religious persecutions.

Most of the ships carrying Irish immigrants to America were well-built and adequately supplied.  And although sailing across the Atlantic in the 19th century presented many challenges, most Irish ships brought immigrants safely to America to begin their new lives.  Irish immigrants typically began their long journey from Irish ports in Dublin, Newery, Cobh (Queenstown), Limerick, Belfast, Londonderry, Galway, Waterford, Liverpool and Silgo, and typically arrived in the North American ports of New York, New Orleans, Boston, Philadelphia, Baltimore, and Newfoundland.

Patrick and Mary wed in Ireland about 1841.  It is believed that Patrick and Mary arrived together in New York Harbor in 1849 aboard the ship, the Stephen Whitney (predating Ellis Island which wasn't created until the early 1890s).  He was 34; she was 26. By the time of the 1850 Census, they were living in Essex County, NJ, in the Newark East Ward.  If Mary had given birth to any children by now, they had not survived in Ireland or the voyage.

I've found no record (yet) of Patrick having any other family that came to America.  Two of Mary's siblings, Peter Cain and Margaret Cain, had also come over (not sure if before or after Patrick and Mary's journey) and landed in either Philadelphia or Baltimore, most likely the latter.  Mary's parents stayed behind in Ireland, but when her mother, Catherine Cain, died in 1848, her father, Thomas Cain, left his Irish village of Ballysax Little and came to America later that same year at the age of 44.  He arrived in Baltimore and connected with Peter and Margaret, both of whom had eventually settled very near where my parents currently live in Maryland.

In 1855, with two children and pregnant with Mom's great-grandmother Elizabeth, Mary and Patrick would leave the northern New Jersey area where they had settled and move to the Cain homestead in Cokeyard, Vale Summit, Maryland.   Neither Mary nor Patrick could either read or write.  Patrick was a laborer according to the 1850 Census, and after moving to Maryland he would work the rest of his life as a coal miner, a profession shared by so many of my ancestors.  Mary would be a home-maker and baby machine her entire adult life.  She would go on to give birth to 10 children in total, 6 of whom lived past childhood:  Mary, Thomas, Elizabeth, Margaret, William, and Patrick, Jr.  The latter would live with his parents until they died.  All the children were literate and educated.

By the time of the 1900 Census, Patrick and Mary had been married a long time; so long, in fact, that they couldn't remember the year they got married.  Under the question of "How long married", the census-taker's response was simply "Don't Know".  They died just over 1 week apart in 1902:  Patrick on February 28th and Mary on March 9th.  If they married the year before they came to America, they would have been married for 61 years.  They would leave their 6 children and 42 grandchildren.  Patrick, Mary and Thomas (Mary's father) are all buried in St. Michael's Cemetery in Frostburg, MD. 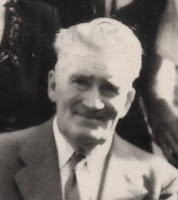 Their daughter, Elizabeth Delaney, would go on to marry John Harrison Carter in 1874 when she was 19 and he was 23.  Elizabeth would give birth to 13 children, only 9 of whom would survive.  Their oldest child, Thomas Patrick Carter, clearly named after his father and maternal grandfather, is my mother's maternal grandfather.  He was born the same year Elizabeth and John were married.  I can clearly see Granny's face in Thomas' photo.