When I was a kid (under 10), my Mom's oldest sister, Aunt Susie, and Susie's husband, Uncle Bill, had a summer getaway along a river. We called it, simply, "Camp". It was no more than a trailer from the 1950's with a huge screened in front porch that ran the length of the mobile home, doubling its size. It only had two bedrooms, but it slept like 20-25 people every weekend. There were three fold-out couches on the porch, a double bed in one bedroom, twin beds in another bedroom, a bunk bed and another fold-out couch in what would be the living room, and more than a few hammocks outside. The porch was painted seafoam green, which came to be called "Camp green". Even now, when I see the colour, it instantly takes me back 30 years.

Every weekend in the summer, my parents would pack us up and we would drive the 45-minute trip, through back, winding roads. Sometimes, the drive seemed to take forever, but there were landmarkers along the way that I used to teach myself distance: the turn at the ballistics lab, the cherry orchard, the T-intersection, the Cone Dip, the fruit stand, the large hump in the road, the old Mill, the dilapidated bridge, and Adams' Farm. One by one, these landmarks brought me closer to Camp, and then one by one took me back home again. Sometimes we would spend a full week, sometimes just a weekend. But it started before Memorial Day and lasted until Labor Day - every summer until I was 10. After over 20 years of fun-filled summers, Susie and Bill decided it was too much to take care of. So they sold it and built a pool in their backyard. 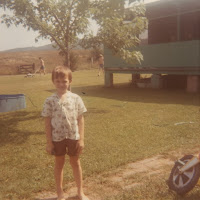 Camp sat on several acres of land. The first day at Camp was pretty much just maintenance and upkeep, at least for the adults (we kids just played the entire time). There was A LOT of grass-cutting. And painting. And repairs. And creativity. Especially creativity. The well-house had been converted to a draft house; which means when Camp finally got decent water that didn't need to be boiled before we could drink it every week, they covered over the well and placed a big fridge in the building and created a draft beer system. Only thing is, you had to stand on a two-by-four when you pulled the draft otherwise you risked electrocution. But I could pull an expert draft by the time I was 7.

Days were filled with swimming in the river, playing horseshoes, games, puzzles, and pretty much anything that required imagination. There was no telephone or television at Camp - you made your own fun. Between my cousins and siblings, there were about 15 kids there on any given weekend. Looking back I sometimes wonder how we filled our days there, but we must have done it successfully cause every weekend, we wanted to go back.

Every dinner was a cook-out of sorts and we all gathered around a huge picnic table. Our nights were filled with music and dancing around a campfire to music like"CC Ryder" by Elvis, "Mustang Sally" by Wilson Pickett, and "Proud Mary" by CCR (which is my family's theme song). Card games were popular unless the humidity was high and then it became impossible. This was the place where I learned to swim, learned to ride a bike, learned how to roast a marshmallow. But mostly, it was just sitting, talking, laughing, and drinking beer.

Kids were put to bed probably around 10 (there were no clocks at Camp, either). My bed was the top bunk in the living room. I always had a hard time falling asleep cause I would lay and listen to the adults. Sometimes a kid was snagged from bed and allowed to join in - but not often. But when you were, it was like visiting the North Pole, or Wonka's Chocolate Factory, or some other fabled place you'd only ever heard about but never seen.

Last summer, I made a trek to the old Camp site. True to form, the area seemed so much smaller than it did when I was 10. The walk to the river didn't seem as far, the small saplings that we had each painted our names on were now tall trees, only a few with just a trace of "camp green" still on them. The dirt city we created under the trailer where we played with trucks is now covered in weeds. The cow pasture on the other side of the road is completely overgrown and hasn't seen a cow in 15 years. Adams' Farm is long gone, so is the old Mill, the dilapidated bridge, and for that matter, so is Camp. But my small handprint is still located in the sidewalk, with my name and the year - 1972.

I have thought of all of this because my Aunt Susie is sick now. She's 76 with dark spots on her lungs. Uncle Bill is 83 and walks around with an oxygen tank. This wasn't supposed to happen. They were supposed to stay the same age so that I could grow up and stay up late out by the fire, and talk and dance and laugh with them. I see them now and I long for the time when I was the boy in the top bunk. They were about the same age I am now. I miss those days. I miss those people. My childhood was rich beyond description. Cousins were just more brothers and sisters. Uncles and aunts were just more sets of parents. And as I watch these people get older, I am reminded how lucky I was then.