For the past month or so, my sinuses have worsened.  I'm sure you, like me, had thought all of this was behind me.  But to pick up where we left off in August, I went in for a follow up appointment in September.  What we found during that appointment was that my sinuses did not heal correctly.

If you put your hands together flatly, the way a child does when praying, and then you bring the fingers of your right hand down so that the tops are pressed against the inside knuckles of your left hand, you'll form 3 sides of a square, or it will look like a lowercase "h".  That's how your sinuses are supposed to be.  Mine, however, healed closed:  Put your hands back in the same praying position, but keep all your fingers pressed flatly together while pulling your right wrist away from your left hand.  Quite different.

And of course, an infection had developed.  So back on antibiotics and steroids I went.  Two rounds each.  Eventually the headaches that I had above my left eyebrow returned, with greater intensity this time.  So I made another appointment for two weeks ago.  My doctor, apparently, had forgotten my appointment and had gone home for the day before I arrived, so an intern saw me and told me to schedule another appointment for after Thanksgiving.

As the pain in my head intensified, it ended up curtailing my Thanksgiving plans.  I didn't go to dinner at Neil and Bob's, which we do every year.  I would have been lousy company.  But I sent Kevin just so he'd come back with leftovers.  I also didn't accompany Kevin to Ohio to see family for the rest of the weekend for the same reasons.  I didn't get leftovers that time, but he did buy me some antique Christmas ornaments for our tree.  Just as wonderful!

So I went in for my appointment with my ENT this past Monday at 2:30.  Because the previous meeting with him had rendered me an emotional disaster, he had prescribed me Valium this time to hopefully calm my nerves to allow him to actually do some work cleaning out my sinuses.  His goal this time was to remove the tissue that had sealed my sinuses so that they could once again drain.  He also needed to continue vacuuming out debris left behind from the original surgery.

This time, I decided to go alone, to not have Kevin with me.  While it was wonderful to have him there for support last time, I thought that I might have used him as an emotional crutch.  Alone, I would just make myself get through it - tough it out.  He wanted to come for support, but I thought I'd do better alone.  And I apparently did.

There were still a few surprises.  For example, the Valium did a good job of calming me down.  It didn't stop the pain I felt, but it did allow me to concentrate on Kevin's face - the very thought of which was a happy distraction.  And the fact that the doctor put a needle up my nose in order to numb my sinus cavities was jarring.  This was - again - something I had to just accept was going to happen and allow him to do it.

When all was said and done and the doctor left the room for me to just relax, I looked over at the tray he was using during the procedure.  It pretty much looked like a surgical tray to me: 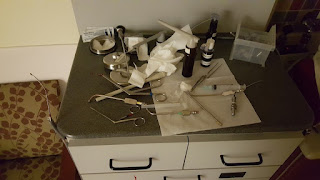 Note the bloody instruments and the blood splatter on the cabinet in the bottom of the photo.  Classic.

I was given a few instructions and permitted to leave.  Once I got out to the street, I felt a runny nose coming on, so I reached for a tissue in m pocket and dabbed my nose only to see the tissue cover with blood.  I thought it was weird that the doctor let me leave the office without 1) letting me know I might bleed at all and/or 2) not giving me something in case I did bleed.  This has been indicative of my medical treatment throughout this endeavor.

I made it home and laid on the couch.  Kevin came home with treats and new slippers for me - the world's best nurse.

So if history taught me anything, it's that my nose will probably drip blood for the rest of today, and then once the swelling subsides the sinuses will drain for about a week or so.  I feel like great progress was made yesterday.  So I am hoping that this really IS the last chapter in this saga.