It's been a while since I've posted anything about changes we've been making in our house.  We've been working hard on a few projects, one of which dominated most of last year: the buildout of the new master bathroom on the lower level.  The bathroom we WERE using was simply unacceptable.  It was 5' x 5', cramped and cold with the weirdest tile pattern imaginable (see right).  We knew when we bought the house that we wanted to change it.  At first, we were just going to somehow enlarge the space but then decided that the 10' x 10' room right next door being used as a combination laundry/storage room was simply under-utilized.  So we decided to switch the rooms.

We started the project just after New Year's Day 2016 and finished in August. When you only have evenings and weekends, it can take some time. Granted, we knew it would be a lot of work because we were going to have to run all new plumbing to a space that didn't already have it.  So we went into the project with high hopes and low expectations.  And it all started with opening the walls:

You know the old saying, "You never really know someone until you live with them"?  Well, that goes for your house too.  You never really know your house until you start opening up the walls to see how it's put together.  It always looks so easy on HGTV; a few hammers to the wall and then a good kick to knock the drywall through to the other side.  So simple.  So clean.  Not so.  Considering the previous owners of our house performed their own renovation at some point, I will either blame them directly for the mess we found inside our walls, or blame whatever Apple Dumpling Gang crew they hired to do the work for them.

And when I say nailed, I don't mean they drove a nail every 18 inches or so.  I mean they nailed the shit outta everything. 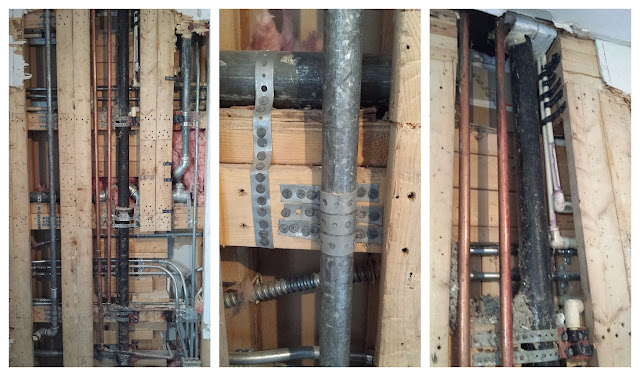 Look at those pics above.  Look how many nails are in those boards.Those black dots in the picture on the left are nail holes from where we had to remove 3" nails.  This picture is indicative of the rest of the room.  And check out the picture in the middle.  It's not like we live on a fault line!  I don't know anything about construction but I know that's excessive support!

This project alone took the first couple of months.  We mostly broke down our responsibilities of Kevin doing demo and me coming in to clean it all up.  And it worked out well.  Once the walls were open, Kevin ran new electrical for outlets and an exhaust fan (the only item I specifically requested in the build out).

Kevin's folks came out one weekend to help install insulation, built a soffit to hide a gas line, and install new studs on which to apply new drywall.

Once all the walls were down and insulation was installed, it was time to run the new pipes, which meant jack-hammering a concrete floor in order to run the drain from the shower and connect the toilet to the main.

What we learned from moving the water main in the guest room last year was that the concrete floors on our lower level are thick - SUPER thick.  So we braced ourselves for a long battle with the floor.  Our plumber was generous enough to allow us to use his jackhammer for the project.  So over the course of about two weeks, the constant rat-a-tat of that tool permeated the house and surrounding area, as did the ensuing concrete dust.  I don't know why we didn't get a picture of ME using the jackhammer, but I will account for doing most of the work on this (I can say this because Kevin did most of the work on the rest of the bathroom).

We then called in the pros to run all the pipes and tie them into the stack.  This was the one thing we knew we needed help with.  After the pipes were run, the plumber built in the corner pan for the 4' x 3' shower (the the 7.5 foot high shower head!) and then filled the concrete back in with cement once again.

Then we took the project back over again.  Kevin and I installed cement board in the shower area and drywall around the rest of the bathroom.  Everything went swimmingly until Easter Sunday.  I had stopped working to put a turkey in the over for Easter dinner when I suddenly heard, "Bun, I cut myself!"  While trimming the cement board, Kevin slipped the utility knife and sliced through the thumb on his left hand - deep enough to require a trip to the emergency room and several stitches. 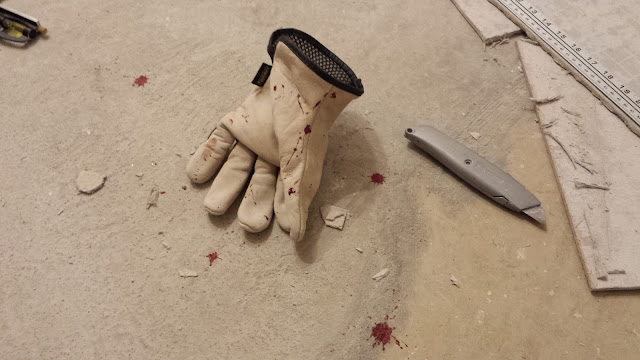 All thing considered, we had gone over 100 days without an accident.  Not many construction sites can boast that accomplishment.  Happy to say this was also the ONLY accident we experienced.  It might have ruined a turkey, but it saved a thumb.  And we have our very own "Out, damn spot" under the tile.

And speaking of tile, that's what came next.  We knew we wanted white subway tile in the shower and a charcoal tile on the floor.  We found the tile we liked the most in Home Depot and would always look at it every time we were in the store, which was at least once every weekend.  On the day we decided to just go buy it, our tile was significantly marked down without our knowing it.  Call it "tile kismet".  But before the tile could go down, we laid floor-radiant heating - crucial for a bathroom that is below grade.  Kevin's parents have lots of experience tiling, so they came back out to provide pointers and guidance. 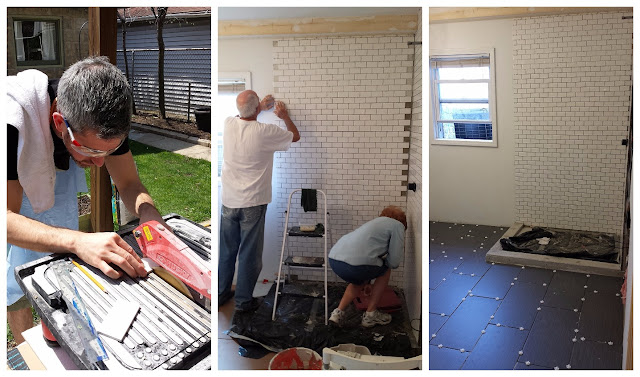 We wanted the tile on the shower floor to be the same color as the floor, but that tile didn't come in smaller sizes.  But that didn't stop us.  We took a few of the remaining 24" tiles and Kevin cut them down into 3" x 3" squares for the shower floor.  Perfection.

The over the next few weeks, we painted the walls pale grey, the same color as the walls in our master and guest bedrooms on the same level.  Then we shopped for furniture, towels, rugs, etc.  And the last thing we did was cover the window in frosted paper to let in light but block the view.

The final look is below on the right.  For comparison, the before picture (taken from the original house listing 2 years ago) is on the left.

We couldn't be more satisfied and proud.  Big shout out to Pat and Dianne Byrne for their guidance and assistance.  Stay tuned for pictures of additional changes we've made in the past year.