A few weeks ago, I wrote about our new bathroom, the housing update project that took us the better part of last year to complete.  A labor of love, to be certain.  But every now and then I walk into it and think, just for a split second, that we built this from nothing.  And then I clean the toilet.

But you know us, so you know this was not the ONLY project we took on.  Along with building out the new bathroom was the project of converting the old one into a laundry room.  The old bathroom was crazy.  It was primarily a wet room which meant it was fine (with the previous owner) if everything got wet.  Not so us.  The entire room was tiled:  there was a matte black tile on the floor and vanity, and an unpatterned tile of white, gray, green and orange 1-inch tiles on all 4 walls (these were individual tiles, not 12"-square pieces).


The room was barely functional as a bathroom.  It didn't make sense.  At one point we originally thought we would expand the room from its 5'x5' floor plan, but since it sits right next to what was then the 10'x10' laundry/storage space, we chose to just switch the rooms.  So while we were demolishing the walls in the laundry room, we took down these walls too.

We found a few things behind these walls - some expected and some not.  The expected items included mold and lack of insulation.  The unexpected included another row of glass brick in the windows.  Why would anyone cover up a window?

So the crap came down and we put up new drywall.  Since the new laundry room and new bathroom are below grade, we installed a pump to surge water to the main and prevent any backups.  Kevin built a table so we could stack the washer and dryer, and then made a storage cabinet that fit into the open space (and also hides the pipes from the pump). 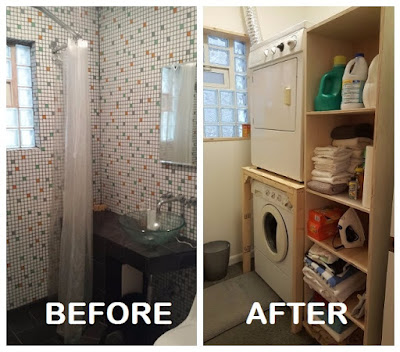 This room didn't make sense (even less sense than the tiny "cruise ship bathroom" we'd just renovated).  It's located on the lower level with the two bedrooms, a laundry room, and a master bath.  You pass through the den to get to everything else.  When we moved in, it had a busted concrete floor and a kitchenette with a small sink and mini-fridge, which seemed odd given that the kitchen was just above this room.

The first thing we did was get rid of the flat green paint on the wall.  This color was throughout the house when we moved in.  I like white walls, so I repainted the walls and ceiling  We carpeted the entire floor, including into both bedrooms and the new laundry room.  The room sat this way for a while as kind of a staging area during the bathroom renovation.  But once completed, we knew what we wanted. We then ripped out the cabinetry and moved it to the garage, which is now Kevin's workshop, more or less.

Since the downstairs is several degrees cooler than the upstairs, we decided to make this a den with a loveseat and TV so we could hang out here in the warmer months.  But we also needed storage for crafting supplies, electronic stuff, Kevin's sewing machine and material, etc. We knew we wanted some kind of storage system, but it had to be unique.

So Kevin created a cabinet system of different sized boxes - most of which would be covered with cabinet doors.  And since we were using 3/4" plywood, the math became pretty tricky.  It's a good thing Kevin is borderline genius.  He figured out the spacing of each box and cut the wood according to his calculations.  After which, it all went together like a 3-D puzzle. 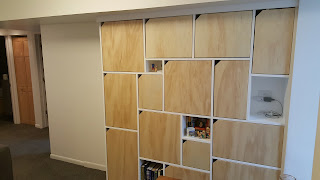 After the grid was installed, we put doors on all but 4 of the boxes.  Everything is contained in plastic bins, labeled of course.  We now have storage space for all our art supplies, sewing stuff, material, electronic things, electrical stuff like extension cords and light bulbs.  There's even a special place for Kevin's sewing machine.
The storage cabinet that used to hang above the old cabinet/sink was moved to the wall opposite the loveseat and our 2nd TV sits on it, ready for summer.  And there is a work table that slides in under the cabinet when not in use.  And the sheet Kevin created when he proposed to me is now hanging on one of the walls.  Below are a few Before/After shots: 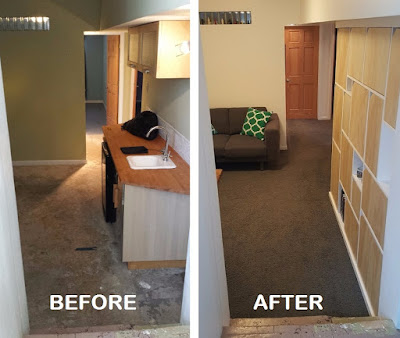 So this little area was the last thing for us to improve in the house.  The only thing we knew for sure was that we wanted to replace the ugly louvered door to the furnace/water heater utility room.  The door ended up getting beaten to death by the guys who had to come in to move the dryer's  gas line.  Kevin removed the wooden slats and replaced them with a thick screen until we were ready to tackle this space.  Because the utility room requires ventilation, Kevin created a door with sunken panels to allow air to flow in and around.  It's a much classier look. 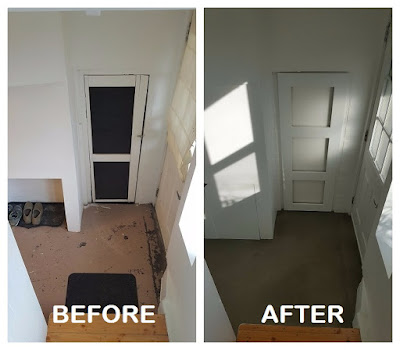 We had waffled about using leftover bathroom tile to put on the floor, but ended up repouring concrete to smooth out the surface.  We took down the ugly roman shade on the door and used the same frosting paper on the door windows that we used on the new bathroom window.  And then we repainted the walls and the door.  It looks so much cleaner.

On the landing is a cut-out space that we have no idea of its intended purpose.  We've been placing dirty or wet shoes in the cubby but we were underutilizing the area.  So we added shelved and Kevin built doors that match the cabinet, only painting them white this time.  Now we have a place to store paint so it won't freeze in the garage during winter.

The final steps in our home renovation were, quite literally, the steps.  Kevin built out frames to square off the steps, poured concrete on the step and then we covered the step and risers with carpet. 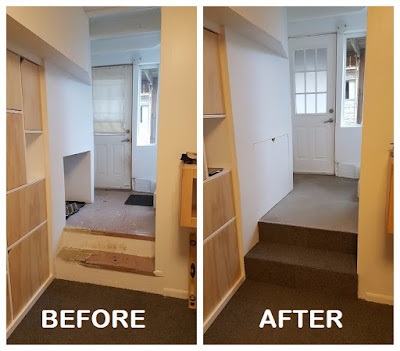 And so now, the inside of the house is pretty much finished as far as planned renovations go.  And we're just under the 2-year mark; March 16th will mark 2 years in this house.  And now that all the big projects are done, we will begin working on the smaller things.

I'll update you on those eventually too.